Metro ‎LASEMA Recovers Body of Man 'Who Jumped Into Lagoon'

The Lagos State Emergency Management Agency (LASEMA) says it has recovered the body of Mr Oluseye Adekunle, who allegedly jumped into a Lagos lagoon on Friday.

He said that the deceased had jumped off the Lekki/Ikoyi Bridge into the lagoon.

Tiamiyu said that a coordinated effort of LASEMA, Lagos State Waterways Authority and Marine Police recovered the floating body at 5.00a.m.and handed it over to the Lagos State Health Environmental Monitoring Unit. 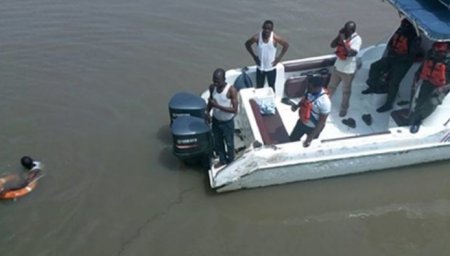 “The body has been taken to Lagos Mainland Hospital Mortuary for deposition.

“Police will carry out further investigations on the matter,’’ he said.

Tiamiyu said that relevant agencies and the family of the deceased were consulted after the recovery to confirm the identity.

He said that the recovery exercise closed at 11.30 a.m.

Metro Daibo Davies, man who jumped into Lagoon was not a LASU graduate – Pulse Nigeria