In 2015, there were lot of revelations on different allegations of corrupt cases in the political atmosphere...

From Dasuki's arms deal scandals to Lamorde's divertion of public fund, Fashola's borehole and website activities, NIMASA scam, Saraki and CCT palava and so on. 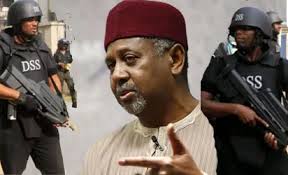 This is among the biggest scams if not the biggest in the history of History that has been revealed. Just as Mama Oby Ezekwesili noted: " the scam is irritating", it is irritating because it has expansive features and many politicians are said to be involved in the sharing of the funds meant for the upkeep of the Army and the purchase of ammunition to fight insurgency in the NorthEast.

Sambo Dasuki and four others are standing trial for allegedly laundering and diverting $2.1 billion (N546
billion) arms fund. The fund alone can fund budget proposal of 6 states in Nigeria.


2. Diversion of Fund worth One trillion Naira by the Corruption Fighter - Former EFCC Boss, Ibrahim Lamorde 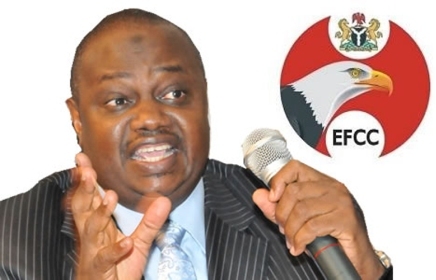 The stain of corruption did not spare anti-graft agencies as former Chairman of the Economic and Financial Crimes Commission, EFCC, Ibrahim Lamorde, was accused of fraudulently diverting over N1tn proceeds from corruption recovered by the agency.

A petition by George Uboh alleged that part of the diverted fund included the loot recovered from a
former Governor of Bayelsa State, Diepreye Alamieyeseigha; and ex-Inspector-General of Police, Tafa Balogun.

Lamorde, who is yet to clear his name in the scandal, was later sacked as EFCC chairman on the 9th November 2015 by President Muhammadu Buhari. 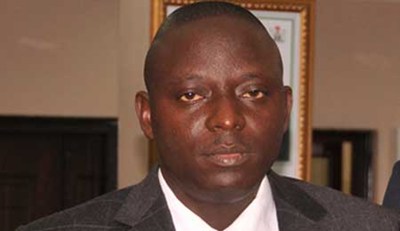 Former Director-General of the Nigeria Maritime Administration and Safety Agency, NIMASA, Patrick Ziadeke Akpobolokemi and five others staff of the agency are currently standing trial on a 22-count charge for allegedly stealing the sum of N2.6 billion belonging to NIMASA.

Embarrassingly, Akpobolokemi on December 14 resisted re-arrest by the EFCC within court premises after he was granted bail by the court. The drama which was caught on tap went viral on social media as EFCC operatives forcefully dragged Akpobolokemi into a waiting van. Akpobolokemi is in EFCC custody and his awaiting trial.

Sanusi also revealed dirty and shocking deals that took place under the immediate past Minister of Petroleum, Diezani Alison-Madueke, who is currently being investigated in the United Kingdom.

“Frankly, I think a billion dollars under Jonathan a month was about what we were losing.” Sanusi said. The allegation has not been investigated by Nigerian Government or Anti-graft agencies

On the 4th of February 2015, The then Director-General, Buhari Presidential Campaign organisation, Rotimi Amaechi of Rivers State, accused some church leaders of taking N6 billion bribe from the Peoples Democratic Party, PDP, to campaign against the presidential candidate of All Progressives Congress, APC, General Muhammadu Buhari (rtd).

Meanwhile, Christian Association of Nigeria, CAN, and the PDP denied the allegation but in a twist, a Borno-based Pastor, Kallamu Musa-Dikwa, on February 19, said that the money that was given to Pastors by the [former] president was actually N7bn and not N6bn as alleged by Amaechi.

Digging deep into the source of funding for the Dasukigate since the National Assembly never appropriated as much as $2.1Biliion for defence budget, it was discovered that Former Minister of Finance Ngozi Okonjo-Iweala approved the diversion of $322 million Abacha’s loot to former National Security Adviser (NSA) Sambo Dasuki to fund the purchase of arms to fight Boko Haram terror.

Okonjo-Iweala admitted transferring the money to Dasuki on approval of President Goodluck Jonathan but maintained that the money was to be treated as a loan.

The controversial website scam of N78million to upgrade the www.fashola.com.

The former governor, Fashola later said in a statement that only N12 million was actually awarded for the upgrade of the site while other services such as the handover countdown clock, mobile apps for

Mr. Fashola is now a Minister of the federal republic and the rest is history for now. 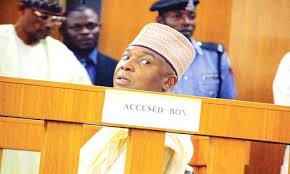 Just after emerging as the Senate President against the wish of his party, Bukola Saraki was arraigned by the Code of Conduct Bureau for alleged anticipatory declaring of assets owned while he was Governor of Kwara state in 2003.

Saraki was also accused of operating a foreign bank account while he was Governor, a punishable offence under the code of conduct act for public office holders.

After an Abuja High Court and Court of Appeal dismissed Saraki’s appeal to halt his trial at the Code of Conduct Tribunal, The senate President finally get an injunction from the Supreme Court ordering the CCT to stay proceedings on Saraki’s trial.

Another shocking corrupt allegation in 2015 was that of Code of Conduct Tribunal Chairman, Justice Danladi Umar who was accused of spending N15.2million CCT’s money to purchase a Toyota Prado Jeep “without following due process”, among other allegations in a petition received by the Senate

The petition came at a time when Umar was presiding over the trial of the Senate President Bukola Saraki for alleged false asset declaration. However, since the beginning of hearing by the Senate House committee, the petitioners have failed to appear before the sitting.

Alhaji Maina misappropriated billions of naira worth of pension funds, which he claimed to have recovered from pension thieves. The senate committee probing pension funds management accused him of mopping up pension funds of about N195 Billion from banks and depositing the money in his private accounts.

On the 2nd November 2015, Maina was declared wanted by the Economic and Financial Crimes Commission (EFCC).

First of all, Dr Okonjo Iweala name should not be found in this type of publication's, she has always been against corruption and its very evident that she is a honest woman.
S

I think its very unfair when someone explains a situation and you turn a deaf hear to it, just because you want to tarnish their image. Dr Okonjo Iweala as explained that she was not involved in any form of corruption regarding finance and she has accurately accounted for Nigeria's funds.
L

Seye Tiamiyu said:
I think its very unfair when someone explains a situation and you turn a deaf hear to it, just because you want to tarnish their image. Dr Okonjo Iweala as explained that she was not involved in any form of corruption regarding finance and she has accurately accounted for Nigeria's funds.
Click to expand...

There's nothing Mama Economy will say to justify herself that people will believe.
F

But Dr Okonjo-Iweala categorically stated that she had nothing to do with the allegations being leveled against her. Why will her name still come up, just in a bid to tarnish her image. The world is watching

@Femi Hassan @Seye Tiamiyu - all the people facing issues now have also categorically stated that they had nothing to do with the cases. That is not a defense. The problem the former finance minister has now, and one which her supporters are failing to understand, is either way she loses.

She was in charge of Nigeria's finances and economy - if she did not know what was happening, she should have known and if she knew and did not want any part of it she should have resigned and give strong reasons for her resignation. Also unfortunately for her, on every public outing with the senate etc, she has not given a good account of herself. While I acknowledge her experience and reputation outside Nigeria, I am truly disappointed with her performance as finance minister under Jonathan. It is not good enough to say it was others and I was not corrupt. She should have resigned. She did not.

Everyone on the list posted have denied it and only time will tell if they are guilty or innocent.

People just support this politicians with sentiments. All those corruption cases happened while Okonjo was in charge of finances. Claiming ignorance makes her an accessory.

@Femi Hassan @Seye Tiamiyu , what now is your defense?
U

Dr. Ngozi Okonjo-Iweala is a world renowned technocrat. I wonder why and how such baseless publications even get to be published? Anyway, no one can tarnish her already credible image.
U

We should learn to draw the line between destructive and constructive criticism for the best interest of our dear country. Nigerians know the truth. They know that Okonjo Iweala is free of all these baseless allegations.
U

The aim of the people spreading these lies has been just to destroy the reputation of madam Iweala. It will not work bad belle people.
U

It pains me when I see people destroying the reputation of the innocent. Okonjo Iweala was wise enough to put a caveat in the memo that was sent to the president stating that Dasuki is answerable to the president. And that the money given to Dasuki was a loan and should be returned. She was a professional who carried out her duty with a sense of transparency and accountability. Where can we say it’s her fault? None, let’s stop this destructive politicking.
U

The President was the one that approved the fund that Okonjo Iweala transferred to Dasuki. She was bound by the ethics of professionalism to transfer the money. She is not corrupt.
L

Uzoma Ngozi said:
The President was the one that approved the fund that Okonjo Iweala transferred to Dasuki. She was bound by the ethics of professionalism to transfer the money. She is not corrupt.
Click to expand...

Now I get why the vehement support...

Let the original Ngozi come out and disprove the allegations