Presidency has released its mid-term fact-sheet as President Muhammadu Buhari mark 2 years anniversary on the May 29 Democracy day celebrations.

The factsheet was organised into three categories, economy, transparency and anti-corruption and security.

1. Growth in Agriculture and Solid Minerals:

The number of sub-sectors of the economy experiencing negative growth has almost halved; falling from 29 sub-sectors for the whole of 2016 to 16 in Q1 2017.Growth in manufacturing has returned to positive territory after five quarters of negative growth. It grew by 1.36% in Q1 2017 after falling to -7.0% in Q1 2016.

Our priority Sectors of Agriculture and Solid Minerals have seen improved performance, in spite of the recession. Agriculture grew by 4.11% in 2016, while Solid Minerals recorded a 7% increase. The contribution of the Ministry of Solid Minerals’ to the Federation Account tripled to about N2 billion in 2016, up from N700m in 2015.

Even at a time of low oil prices (and by implication low government revenues):

3. Phasing Out of Subsidy Regimes for Petroleum Products and Fertilizers.

The Anchor Borrowers Programme (ABP) of the Central Bank of Nigeria (details below), combined with a newly developed soil map designed to aid fertilizer application, substantially raised local production of grains in 2016 (yields improved from 2 tonnes per hectare to as much as 7 tonnes per hectare, in some States) and produced a model agricultural collaboration between Lagos and Kebbi States.

The Presidential Fertilizer Initiative (which involves a partnership with the Government of Morocco, for the supply of phosphate), has resulted in the revitalization of 11 blending plants across the country. The benefits include annual savings of US$200 million in foreign exchange, and ₦60 billion annually in budgetary provisions for Fertilizer subsidies. The Scheme has also made it possible for Farmers to purchase Fertilizer at prices up to 30 percent cheaper than previously available.

4. Support for Micro, Small and Medium Enterprises: The Administration has launched a series of funding and capacity development initiatives designed to support MSMEs across the country, as follows:

· The MSME Clinic, which bring relevant Government Agencies and their managements together with small businesses operating in various cities across the country, to enable the Agencies provide direct support to these businesses. The Interactions allow the Agencies better understand the issues facing small businesses, and provides a platform for speedy resolution.

Ease of Doing Business Reform Successes: The Presidential Enabling Business Environment Council (inaugurated by President Buhari in August 2016) implemented a 60 National Action Plan between February and April 2017, with 70 percent of the Targets achieved, including the following:

Acting President Yemi Osinbajo has since followed up on the National Action Plan by signing, in May 2017, Executive Orders on Improving Efficiency in the Business Environment, and on Promoting Local Procurement by Government Agencies.

6. Progress with the Alignment of Monetary, Fiscal and Trade Policies: Landmark initiatives here include:

7. A new Social Housing Programme is kicking off in 2017. The ‘Family Homes Fund’ will take off with a 100 billion Naira provision in the 2017 Budget. The rest of the funding will come from the private sector. A pilot component has already kicked, to construct the first set of homes for the Programme)

8. 1.2 Trillion naira has been released for capital expenditure in the 2016 budget, since implementation started in June 2016. This is the largest ever capital spend within a single budget year in the history of Nigeria. This investment has enabled the resumption of work on several stalled projects — road, rail and power projects — across the country.

9. All 4 components of the Social Investment Programme (SIP) have now taken off. 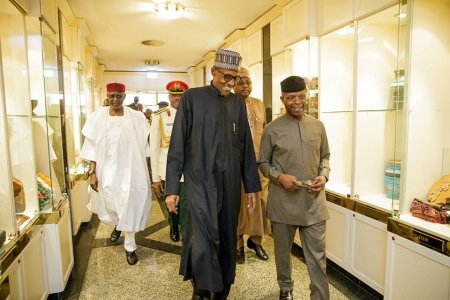 10. Strategic Engagements with OPEC and in the Niger Delta have played an important part in raising our expected oil revenues. Already, Nigeria’s External Reserves have grown by around $7 billion in the last six months. In the same period we have added $87m to the Excess Crude Account, and $250m to the Sovereign Wealth Fund.

New Vision for the Niger Delta:

The New Vision brings together a robust set of promises, solutions, targets and initiatives aimed at ensuring that the people of the Niger Delta benefit maximally from the region’s oil wealth.

The New Vision offers a detailed response to the 16-point Demand Agenda submitted to President Buhari by the Pan Niger Delta Forum (PANDEF) in November 2016.

Tangible results of the New Vision so far include:

11. Beneficial Government-to-Government Partnerships with China and Morocco: President Buhari’s April 2016 Official Visit to China has unlocked billions of dollars in infrastructure funding. Construction work has commenced on the first major product of that collaboration, a 150km/hour rail line between Lagos and Ibadan.

12. The National Economic Recovery and Growth Plan (NERGP), the Federal Government’s medium-term Economic Plan, launched by President Buhari in April 2017, charts a course for the Nigerian economy over the next four years (2017–2020).

The Vision of the NERGP is to restore economic growth, invest in Nigerians, and to build a globally competitive economy, and the Plan aims to achieve these by focusing on five execution priorities:

The ERGP will return Nigeria’s economy to sustainable, inclusive and diversified growth, and to transform Nigeria from an import-dependent to a producing economy; a country that grows what it eats and consumes what it produces.

The almost 8-fold oversubscription of our recent Eurobond (orders in excess of US$7.8 billion compared to a pre-issuance target of US$1bn) demonstrates strong market appetite for Nigeria, and shows confidence by the international investment community in Nigeria’s economic reform agenda.

14. Improved Local Refining Capacity: The total amount of Crude refined by the NNPC’s three Refineries (Port Harcourt, Warri and Kaduna) grew from 8m barrels in 2015 to 24m barrels in 2016, and 10m barrels in the first quarter of 2017.
O

This one week me
R