World 21 African Presidents Who Are Above 70 Years

Africans are peculiar with old age leaders, many of whom are still long serving Presidents in their countries.

They controlled African policies and stay the lives of millions of African youths on economic, social and political issues.

In Nigeria, There has been so much excitement among youths about a bill christened the Not Too Young to Run sponsored by Honourable Tony Nwuhulu in the the Federal House of Representatives to reduce the age of political office aspirants.

Here are 21 African leaders, whose age are above 70 years.

1. Isaias Afwerki – 70 President of Eritrea, a position he has held since its independence in 1993

4. Omar al-Bashir – 72 Omar Hassan Ahmad al-Bashir is the president of Sudan and head of the National Congress Party. He came to power in 1989
5. Pakalitha Mosisili – 72 Mosotho politician who has been Prime Minister of Lesotho since March 2015. He previously served as Prime Minister from May 1998 to June 2012 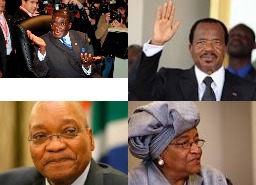 7. President-elect Akufo Addo – 72 Nana Addo Dankwa Akufo-Addo is a Ghanaian politician and the President-elect of Ghana. He ran for President of Ghana in the 2008 and 2012 presidential elections as the New Patriotic Party(NPP) candidate, but was defeated both times by the NDC candidate: John Atta Mills in 2008 and John Dramani Mahama in 2012

8. Denis Ngueso – 73 Denis Sassou Nguesso is a Congolese politician who has been the President of the Republic of the Congo since 1997; he was previously President from 1979 to 1992.

9. Muhammadu Buhari – 73 is the President of Nigeria, in office since 2015. He is a retired Major General in the Nigerian Army and previously served as the nation's Head of State from 31 December 1983 to 27 August 1985.

10. Jacob G. Zuma – 74 Jacob Gedleyihlekisa Zuma is the President of South Africa, elected by parliament following his party's victory in the 2009 general election. He was re-elected in the 2014 election.

11. Alassane Ouattara – 74 Alassane Dramane Ouattara is an Cote d'ivoire politician who has been President of Côte d'Ivoire since 2010.

14. Hage Geingob – 75 Hage Gottfried Geingob is the third and the current President of Namibia, in office since 21 March 2015.

16. Alpha Condé – 78 Alpha Condé is a Guinean politician who has been President of Guinea since December 2010.

19. Paul Biya – 83 Paul Biya is a Cameroonian politician who has been the President of Cameroon since 6 November 1982

21. Robert Mugabe - 92 Robert Gabriel Mugabe is a Zimbabwean revolutionary and politician who has governed the Republic of Zimbabwe as its President since 1987, having previously governed as its Prime Minister from 1980 to 1987.