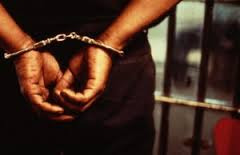 Agbaje is standing trial on a six-count-charge of felony, forgery, fraud, unlawful possession and theft.

The prosecutor, Sergeant Lucky Ilevbare, told the court that the accused in September 2014 at Abesan Estate in Ipaja, a suburb of Lagos, conspired with one Sunday to commit felony and stealing.

"The accused collected N550,000 from one Mr Ehigozie Sammy with the promise to get a German visa for him in which he was not in the capacity to do so.