Menstrual pain, also known as dysmenorrhea is severe abdominal pain felt during menstruation. Statistically, it is the most common gynecological symptom affecting women in reproductive age group worldwide. However, slight pain during menstruation is normal but such pain should not be severe enough to affect normal daily activities. When this occurs, certain lifestyle can be attributed to such occurrence. 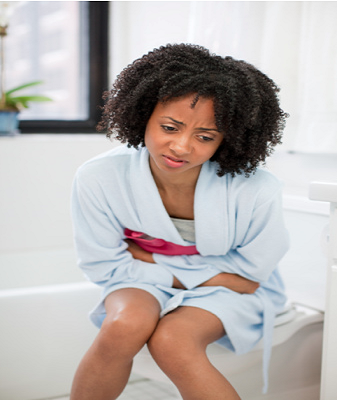 In our society, many myth and belief surround menstrual pain and women have been found to indulge in certain practices that worsen menstrual pain or even cause severe body damages. In this article, we will be discussing 5 things you should stop doing if you often experience menstrual pain.

1. Douching during menstrual flow
Douching is a common practice done by women after sexual intercourse with the aim of washing the vagina and keeping it clean. It is not uncommon to hear women advocate douching to their counterparts claiming that it cleanses the vagina hence reduces menstrual pain. Normally, the female vagina has certain microorganisms that control the pH of the vagina whilst keeping it healthy, clean and free from infection. Douching alters this normal flora paving the way for the establishment of infection. Douching during menstruation doesn’t alleviate menstrual pain, but it increases the risk of infection which actually increases the chance of having painful menses from associated pelvic inflammatory disease.

2. Avoiding water and increasing salt intake
It has been found out that most women tend to avoid water during menses because of the fear of getting bloated which has been shown to increase the severity of menstrual pain. Also, during menstruation, some women develop some weird cravings for processed foods and meals rich in salt. Salty diet increases the likelihood of water retention which causes abdominal bloating (a risk factor for dysmenorrhea), but in contrast, increasing water intake and reducing/ maintaining normal diet cleanses the systems, prevents salt and water intake, energizes the cells and also reduces the risk of abdominal bloating. All this factors reduces menstrual pain.

3. Avoiding pain killers
Taking drugs and keeping to the prescribed schedule can be difficult as most women have been found out to avoid painkillers during episodes of dysmenorrhea. It is advisable that all women with painful menstruation should stop avoiding the use of pain killers which go a long way in reducing the severity of menstrual pain. These painkillers can be purchased as OTCs. Always have a pack of painkillers handy whenever you are expecting your menses.

5. Avoid sedentary lifestyle
Exercise is usually recommended for women experiencing menstrual pains because it improves blood flow to female organs, relaxes the organs and the mind, relieves stress and improves well-being. Mild to moderate exercise has been shown to increase the release of endorphins from the brain which acts as a potent analgesic effective in reducing pain. Exercises like brisk walking, treadmill, moderate cycling, swimming and yoga are effective in reducing the severity of menstrual pain. Women who often experience menstrual pains should avoid sedentary lifestyle and benefit from the painkiller effect of exercise.
Last edited by a moderator: Aug 13, 2015

Sexual Health If You Experience Pain During Ovulation, Here’s How to Relieve the Symptoms – Woman’s Day

A
Why You Should Never Ignore a Bleeding Vagina