Okagbare, who had a poor outing in Beijing, China, at the recently concluded IAAF world championships blamed the situation on a lingering injury, which she explained was the reason she don't take part in not more that one race. 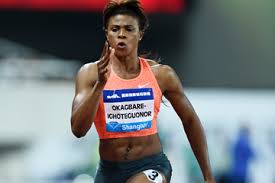 Francis ran the opening leg of the race before handing the baton to Okagbare-Ighoteguonor, who helped the Nigerian team open a huge lead that saw them finish the race in a time of 43.10 seconds.

With Okagbare creating a huge gap, Nigeria's third leg, Onwumere kept the pace and then allow the anchor leg of the race, Ozoh, just had to coast to the finish line once Onwumere handed over the baton to her in the final 100 metres.

Ghana finished in second place in a time of 43.72 seconds while Ivory Coast came in third with 43.98 seconds. Supersport