Entertainment Adele - “I support Hillary Clinton 100 per cent, I do”

English singer and songwriter, Adele has endorsed Hillary Clinton as the next President of the United States of America. 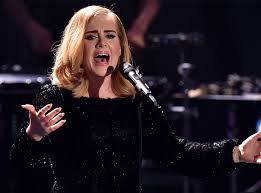 Adele said, “I’ve got to be honest with you, i’m really glad i’m not an American at the moment, it’s hard work.''

“And for anyone else that wants to vote for him, I don't care, good for you, do whatever you want,” she added. “I'm just letting you know who I would vote for”.