Afghan President Ashraf Ghani has promised to “bury” the Islamic State (IS) militant group, whose local offshoot has clashed with government forces and Taliban fighters.

In a BBC interview, Ghani said IS was “not an Afghan phenomenon” and its atrocities had “alienated the people”.

“Afghans are now motivated by revenge,” he said. “They [IS] have confronted the wrong people.”

“There is no denial that we are dealing with very significant risks,” he said, during a visit to the World Economic Forum in the Swiss ski resort of Davos. 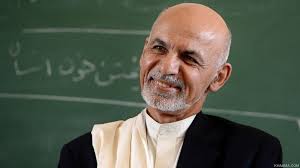 “A lot of my diplomacy has been to create the regional consensus, and a region with the inheritance of previous animosities and short-sighted behaviour is something that is going to require effort and focus.”

The US state department said last week that it had designated the IS offshoot in Afghanistan as a terrorist organisation.

In other comments, Ghani warned that if peace talks with the Taliban did not start by April the conflict would intensify, with consequences across the region.

“Time is not a friend,” he said. “We all understand that February and March are crucial.”

The Afghan president said observers should understand that the war in his country was “just one component” of a wider war that also encompassed Pakistan.

“The problems… are interrelated [and] cannot be solved by use of force in one country.