Politics After Being President of Nigeria, I Will Become A Pastor - Fayose

Governor of Ekiti state, Ayodele Fayose, says after retiring from politics, he would become the pastor of a “very big ministry”.

He said his next target after leaving office is to become the president of the country after which he would go into full-time ministry.

Fayose said his “popularity” and “influence” would serve him in achieving his ambitions.

He said this during an interactive session with some reporters in Lagos. 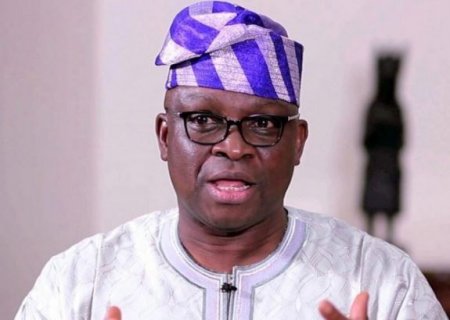 “After being president of Nigeria, I will be a pastor who will be a major force all over the world.”

Speaking on his “ spiritual gift” the governor said he had been getting requests to prophesy about Nigeria’s future.

“Nigerians know that if I give you figures, they find it like that even my prophecies. Some of the things I said about last year came to pass. Some people have been calling me to ask for the prophecies for 2018,” he said

May 19, 2022
ese
E
E
Politics Saraki: After I become president, there will be no more banditry in Nigeria - The Cable

Apr 24, 2022
ese
E
K
Politics Akeredolu: I am a miracle child, became Governor without support of anybody – P.M. News

Mar 20, 2022
Kayode Israel
K
K
Politics Fayose to Buhari: No true president will wait to be compelled to speak to his people – PM News