About 100 influential personalities are under probes by Economic and Financial Crimes Commission, EFCC in the country.

The high-profile individuals who are reportedly being probed by the Economic and Financial Crimes Commission (EFCC) include former governors, ex- ministers, justices and an ex-first lady.

An EFCC source told PUNCH that the list includes not less 100 high-ranking public officials and persons who served in the Goodluck Jonathan administration.

As reported, the list have been sent to Abubakar Malami, the attorney general of the federation and minister of justice, by the anti-graft agency.

The investigations on the high profile persons were said to have been instigated by petitions, whistle blowers and through intelligence gathering.

Here is the full list of 24 high profile individuals: 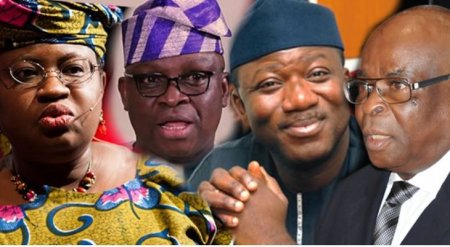 17. Reuben Abati, ex-special adviser to the
president on media and publicity

A cursory look at the names of the High-Profile individuals on this list reveals a good number of them served under the previous administration and this is something of interest.

Is this a Political witch-hunt between parties?

How did EFCC allow the list to be exposed? How did Punch intercept the list in question? What is the authenticity of this list? This country!

Nobody is guilty unless proven so by the Court. Everything else is just speculation.

The credibility of EFCC is always in question these days. Its needs a reform.

Can we trust this government to totally stamp out corruption?

I would appreciate a public statement made by the EFCC to clear things up.