A new militants group known as New Delta Suicide Squad (NDSS) has emerged as Federal Government moves against the Niger Delta Avengers (NDA) and other militants activities in the oil rich region.

Unlike the NDA which concentrates its attacks on pipelines and facilities of major oil firms, the new group has threatened to destroy the equipment of private oil firms’ installations in the region.

The announcement of the group came on the heels of President Muhammadu Buhari’s threat in a national broadcast to mark his first anniversary in office, to crush the upsurge in militancy in the Niger Delta which has crippled Nigeria’s oil production.

The NDSS warned owners of tank farms, storage tanks and private jetties to quit the Niger Delta within seven days. 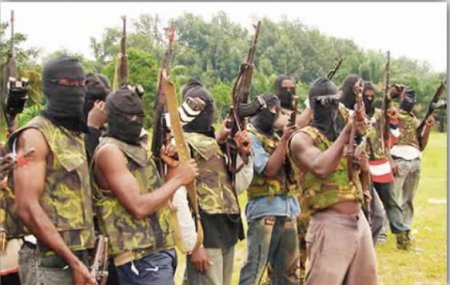 It said failure to comply with the deadline, the owners of such facilities stood the risk of losing their investments.

In a statement issued on Monday by the spokesman of the group, Harry Ebiye, he said: “The New Niger Delta Suicide Squad warns all owners of tank farms, storage tanks and private jetties to quit the region within the next seven days beginning from the date of this publication or risk the destruction of all their facilities from the date of the expiration of this ultimatum.

“The exploitation of this region by scavengers, economic pirates, and cowboys must come to an end” Ebiye said.