Curators
Barcelona head coach, Luis Enrique has insisted that Lionel Messi may not feature for the Catalans as they prepare for battle at the Santiago Bernabau against Real Madrid on November 21. 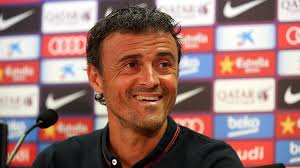 The. Four-time ballon d'Or winner has been out for over four weeks owing to his knee ligament injury that was originally estimated would keep him our for six to eight weeks.

Messi revealed that he's doubtful for the trip to the Bernabeu last week by claiming he would only return when he feels 100 percent fit.

The 27-year old has also been left out of the Argentina national team by coach Gerardo Martino ahead of their World Cup qualifiers against Brazil and Colombia on November 13 and 17 respectively.

And Enrique insisted that with two thirds of the season still to play after El Clasico, it would be reckless to risk Messi suffering another serious injury.

"Within the team the only thing we are contemplating is that Leo Messi recovers 100 percent. That is the only thing that worries us," Enrique said on Friday.

"Whether that is for one particular date or another is indifferent. There is so much of the season to go that the most important thing is that he fully recovers."

Enrique was handed an injury boost on Friday, though, as midfielders Andres Iniesta and Sergi Roberto have both been passed fit to face Getafe on Sunday.

Iniesta has been sidelined for a month since pulling up with a hamstring injury in a 2-1 win over Bayern Leverkusen, while the versatile Roberto returns after just 10 days out due to a groin strain.

Their return comes at the perfect time for the European champions with Enrique's midfield options reduced to the bare bones by Rafinha's long-term knee injury and Javier Mascherano's suspension for Barca's next two league games. Supersport