Tensions are building up in the South-East, following the threat by the Movement for the Actualization of the Sovereign State of Biafra, MASSOB, and the Indigenous People of Biafra, IPOB, to lock down the region in protests, over the continued detention of Radio Biafra Director, Nnamdi Kanu

Kanu, who was arrested by the Department of State Security, DSS, on October 17,2015, on arrival from the United Kingdom, has been in DSS detention facility in Abuja even though the Magistrate Court,Wuse 11, and Federal High Court, Abuja Division had both granted him bail and ordered his release. 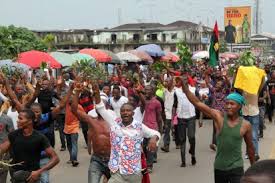 In a statement by the MASSOB National Director of Information, Samuel Edeson, and IPOB Secretary,Ibem Ugwuoke Ibem, yesterday,the pro-Biafra groups warned the public to stay at home from tomorrow (Monday) as there will be massive civil disobedience, protests and demonstrations in the South-East and parts of the South-South to force the Federal Government to comply with the court orders.