BIAFREXIT: 10 Reasons Why Biafra Republic May Not Work Out

Curators
Last week, the Indigenous People of Biafra, IPOB, called on the federal government of Nigeria and British Prime Minister, David Cameron to organize a referendum with the slogan; ‘BIAFREXIT’ for the secession of the south-east region into the Republic of Biafra. 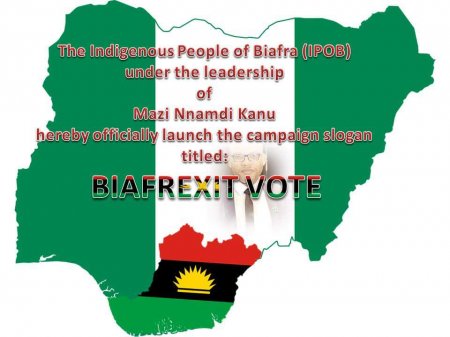 In a quick reaction to this, Senator Ben Murray Bruce on Monday advised pro-Biafra agitators to tread with caution. Quoting him: “Brexit (has already) hit the British Economy hard. I’m sure they’ll recover. But what does it mean for Nigeria? It means we are better as one nation.”

How right is Mr Bruce? Here are 10 reasons why a Biafra Republic may not work out even if secession succeeds.

1. Leadership: The African continent is in a constant milieu of bad leadership at every level of governance. This variable realistically cannot be counted out in the sojourn of any third world country and a Biafra republic will not be left out.

2. System of Government: Will it be federal or unitary, presidential or parliamentary, a strong centre or a confederation? ‘Biafrans’ will have strong and diverse opinions about this. These diversity if not properly managed may culminate in total breakdown.

3. Militancy Will Continue: An average Pro-Biafran will argue that secession is the one and only solution to their problems, the necessary and sufficient condition to end series of attacks by militants. To a far extent however, these notions are wrong and untrue. The aim of militancy goes beyond agitations and boils down to individual agenda of a few. In addition, since it worked in Nigeria, it will become an instrument which will be employed often by agitators. This will surely contribute to a fall of such republic.

4. Leadership Tussle: The road to independence may be the same road to impotency of a Biafra Republic. Prominent among the agitators today are; Nnamdi Kanu, the Okahs etc. Prominent politicians in the region may jostle for different political positions and serve as godfathers. Leadership tussle if degenerated may cause friction and subsequently perpetuate hostility which will affect negatively.

5. Over Reliance On Oil: Just like its ‘mother country’ Nigeria, Biafra Republic will continue to rely solely on oil. However, if not properly managed coupled with the fact that developed nations are doing all it could to alternate oil, such reliance may halt a ‘promising Biafra government.’

6. Biafra May Never Come: Just like it was experienced between 1967 and 1970, a Biafra Republic may never materialize if the two parties toll the arms way. In a war which lasted for 30 months, over one million people died. Some died in the battle while others were lost majorly through famine, and hunger. There were over 50,000 casualties of soldiers both from Biafran side and the Nigerian military. A repeat of such war will not only spell doom for the Biafra but also the mother country Nigeria.

7. Spending on Infrastructure: If however the war broke out, the South East won and a Biafra Republic came to being, a reconstruction plan will cripple the republic.

8. Neo-Colonialism: In its message to David Cameron, IPOB emphasize the need for the British Prime Minister and Britain itself to intervene in their cause. This could be considered a bold move but more importantly, those who conceived the idea are oblivious of the fact that the international community is one with no permanent friend but permanent interest. If Britain has a hand in their secession, Biafrans should be ready for years of neo-colonialism.

9. Lack of Visionary Leadership: Visionary leadership have over the years eluded African nations. Nigeria with the bulk of its human and natural resources still wallow in the league of third world countries due to corruption and insensitivity of its leaders. its an epidemic and should be expected in an independent Biafra.

10. Desperate and Detrimental Moves: The agitation for the Republic of Biafra isn't coming at the right time in Nigeria's political space – not when the nation has to grapple with many pressing issues. Moves by Biafra agitators have been detrimental and desperate. For instance, the move by the IPOB's leader, Nnamdi Kanu seeking to acquire weapons to fight Nigeria, and the recklessness that has characterized some of their protests makes the cause unworthy, and may definitely mar it's independence as a nation.

Go and say this to SOuth Korea, or Japan