We read from Vanguard that after Boko Haram's failed attempt to recover the corpse of their leader, Mohammed bashir (the Shekau imposttor), a foreign computer expert suspected to be behind the several video uploads by the terrorist group has been arrested.

He was reportedly apprehended with sophisticated gadgets and copies of some of the videos he had sent to online media houses including footage of the Chibok girls.

According to OsunDefender's sources, the man was arrested during a shootout by the terrorists on Konduga. The plan was to recover the impostor's body and bury it at a site they call their shrine.

So far, Vanguard reported, the foreigner has made confessions about the group's modus operandi including information about future plans of the sect, sponsors/backer, and it is believed this information will help Nigeria's troops speed up the process of crushing the insurgents. 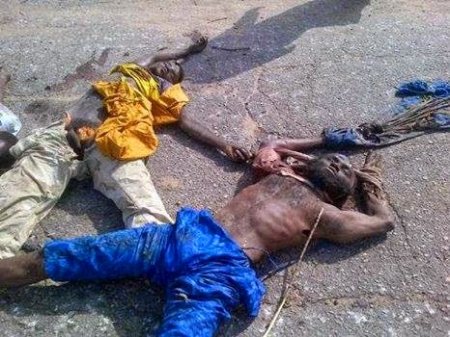 Good! Let's keep crushing those cockroaches called Boko Haram - I do hope we can purge the nation free of them all.