Metro Bomb Attack: How 90-year-old Woman Risked Her Life To Save N300 Potatoes

Curators
A 90-year-old Internally Displaced Person, Zahrah Musa, on Wednesday rushed to save her N300 potatoes, minutes after she escaped a bomb attack in Maiduguri. 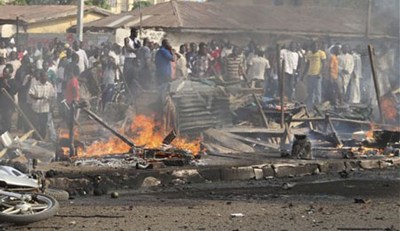 While fellow IDPs kept a safe distance from the scene of the bombing, Zahrah searched her burnt tent in an effort to recover the potatoes.

The woman kept saying “I am very hungry” as she searched for her potatoes and ignored emergency rescue workers from the National Emergency Management Agency who tried to stop her.

Zahrah, who was wounded in the explosion, insisted that getting back her food was of paramount importance to her.

When it became obvious she would not budge, a NEMA official had to carry her in his hands to a mobile ambulance to treat her bleeding legs.

In spite of her condition, the woman continued to protest, saying she must be allowed to get back her potatoes, which she bought the previous day at N300.

The scene of the early morning attack at Muna garage was an unofficial IDP camp, where people live on their own without access to the food rations provided by the government and other support groups.

However, the Chairman of the State Emergency Management, Mr Satomi Ahmed, said that the state government would provide relief materials to those living in such camps.