Curators
Brazil's President Dilma Rousseff has condemned the move to impeach her as a "coup" and a "farce", denying she has committed any crimes.

She said this while addressing the nation on TV for the first time since senators voted overnight to suspend her for budgetary violations and put her on trial. 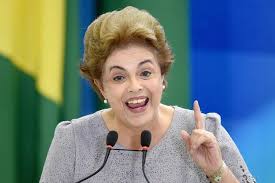 In her TV speech in front of supporters at the presidential palace, Mr Rousseff said that she may have made mistakes but had committed no crimes, adding: "I did not violate budgetary laws."

She said: "What is at stake is respect for the ballot box, the sovereign will of the Brazilian people and the constitution."

Branding the process "fraudulent", she vowed to fight the charges against her and said she was confident she would be found innocent.

The trial may last up to 180 days, which would mean Ms Rousseff would be suspended during the Olympic Games in Rio de Janeiro, which start on 5 August.