“Lauretta. Lauretta. Who is she?”

“She is a social media assistant at the Presidency. She shoots straight and direct. She defends President Muhammadu Buhari with the passion of someone the President treats like a daughter.”

“Not a son, this time, a daughter! Interesting. Of power, fathers, wives, sons and daughters….”
“She spits fire, particularly if the person involved is in any way related to either the People’s Democratic Party or former President Goodluck Jonathan.”

“I see…”
“I try to pay attention to the many battles of the spin community in Nigerian politics.”

“Well, I have tried to tune off for a while. Now that the social media is dominated by all kinds of ghosts and malcontents, I just don’t always take everything that I read there seriously. I should pay attention to this your Lauretta though. She is likely to provide a lot of comic relief.”

“You call it comic relief?”
“You never know. What is she saying?”
“I have just read a piece she wrote saying some politicians are now hiring marabouts, pastors and Bishops to pray for President Buhari’s death.”
“Pastors? Praying for someone to die? Contrary to the miracle of Lazarus and the fact of Resurrection?”

“We are not talking logic. It is not everything that happens in society or in the corridors of power that is logical. If Lauretta says politicians are hiring marabouts and pastors to pray for the President’s death, she must know what she is talking about. Have you not seen how the Buhari Media Centre has been very busy raining curses on anybody who wishes the President dead? They have even chosen a song: Baba oh Baba oh, Baba o, oluwa da Baba si fun wa.”

“I see there is a singing competition in Abuja now between the Senate and the Villa. It is good to sing.”

“She says certain politicians are attacking President Buhari because he is still alive, despite their prayers. She insists they just don’t want him in power. They robbed him of victory in three past elections, and now that he has won, and is in charge, they are recruiting marabouts and soothsayers to pray for his death.”

“Hmm, these demons and principalities…”

“She even pointed out that those who wish the President dead travel to Niger and as far as India to recruit evil spiritualists.”

“She should name the persons involved so they can be charged immediately for high treason, or at worst attempted murder, or spiritual assault with intent to kill.”

“How do you prove spiritual assault?”

“The security agencies can start with the investigation of anybody who has travelled to Niger and India in the last six months to determine if such persons had any contact with a marabout, a pastor or a bishop in those countries.”

“You think this is a joke? I know these things. The only thing I don’t understand is why Niger and India. There are more marabouts, pastors and bishops in Nigeria.”

“I think the President’s enemies travel abroad because walls have ears. The Ministry of Foreign Affairs should summon the ambassadors of Niger and India and any other country that may be identified to shed light on the relationship between the Nigerian political elite and the marabouts in their countries. This is a matter for the Foreign Affairs Ministry.”

“But under what law will the Federal Government try the marabouts and their clients? Or prove that they are praying for the President’s death?”

“They’d create one. That is easy. And they can start with social media. There is a website for example that announced what did not happen. Then there is a British politician who is already sending condolence messages, and writing opinions about what does not concern him.”
“Are there marabouts on social media?”
“Ha. Plenty”
“And that Oyinbo man, is he a marabout too, hired by Nigerian politicians? You see, then, Lauretta knows what she is talking about. Too many things in this country are remote-controlled by remote forces and marabouts. The most dangerous ones are the marabouts who call themselves clerics, with big titles.”

“But I really don’t know why anyone would wish the President dead. That is wicked. It is a much better business to pray for the President to get well soon. We can organize prayer rallies and receive sponsorship from the private sector, government at all levels and their contractors. I am even surprised that holidays have not yet been declared for prayers yet.”

“You are right. Government can neutralize the wickedness of the marabouts by recruiting prayer warriors. Pastors and Bishops who can preserve, protect and promote with the sacred power of the Word. Imams who can talk directly to God and make things happen.”

“And the people who pray will smile and receive praise.”

“Candidly, I would love to recommend some Pastors and Bishops who will counter the marabouts and the other pastors with prayers that will destroy demons and principalities, fire-for-fire, back to sender!”
“We can even do a book, you know?. Powers, Demons and Principalities: A History of Nigerian Politics.”

“Where will you find the empirical evidence for that?” Sounds somehow.
“Don’t worry. Someone once got a Ph.D with a dissertation titled “A History of the Penis.”
“What? Strange things happen in this world.”

“Like what happened in Ibadan yesterday. That’s what I wanted to discuss with you before you brought up this matter about marabouts.”

“What happened?”
“First, let me ask you, how is that your Made-in-Oyo-state cousin? Where is she? She stands the chance of making a fortune before next week”

“How? She is fine. She is in Lagos.”
“Very good. I think she should just start going to Ibadan right now and get ready for a beauty pageant. I know her. She is beautiful and I am sure she will win the top prize.”
“I am lost. Free me.”

“The Oyo State Government is organizing a beauty pageant for ladies with tribal marks to celebrate the 2017 World Culture Day and to promote cultural tourism. The lady with the most beautiful tribal marks will go home with good prizes. In fact the state government declared that on Monday, May 22, civil servants and other persons in the state should wear traditional attires to work, play traditional games and eat traditional food.”

“Amala and gbegiri day.”
“You should ask why the pageant is only for beautiful ladies with tribal marks. Where are the men?”

“My cousin is over 40. She can’t go for a beauty pageant.”
“There is no age barrier. And your cousin is hot. She has the best tribal marks I have seen although I don’t understand why your Uncle, who is educated, should subject her to such violence.”

“Identity. Tribal marks indicate your place of origin. It was used in the age of slave trade and inter-tribal wars to properly identify persons who were sold into captivity or captured as prisoners of war. With their tribal marks, they could easily trace their way back home.”

“And that is what Oyo state is promoting in the name of cultural tourism in 2017? Nonsense. Who needs tribal marks in the age of the millennials? There are modern means of identification: your passport, driver’s license, national identity card, even your fingerprint and iris. So, what is Oyo state planning to celebrate – that tribal marks are good?”

“I just hope they will not insist on female genital mutilation or leviration as part of culture.”
“Certain aspects of our culture have been overtaken by modernity, science and technology. You can promote local fashion, but tribal marks? Made-in-Oyo state? Oh no. I hope they don’t end up at that beauty pageant with fake tribal marks, straight from Nollywood. Make-up artists are so good these days, they can inflict fake tribal marks on a face, the person wins and she walks away.”

“I hope that happens. As for my cousin, no, I am not even sure she is proud of the bold scars on her face. Not even the United Nations which declared a World Culture Day will be happy.”

“Tell them in Ibadan. If they want to promote culture, they owe the people good governance. That’s all. Culture is about the way we live, and the way we see the world as a people, community, group, society and government. It is a broad, dynamic, living organism. The Constituted Authority in charge of Oyo State should know that.”

“Yes. Yes. Yes oh. I was surprised though to see that they also have culture in Saudi Arabia.”
“There is culture everywhere.”

“Apart from Islam, I mean. I was surprised to see dancing, drumming and sword-waving at the reception for US President Donald Trump. The Americans seemed happy with Arabian culture.”

“You really believe that? I don’t think President Trump and his team give a damn about Saudi Arabian culture. The Secretary of Commerce danced, the President swayed awkwardly, and bowed to the king because the Americans were able to secure good business deals. Natural resources, construction contracts and sale of military equipment to Saudi Arabia worth $110 billion which Trump described as tremendous investments. The State Department celebrated how this could create tens of thousands of new jobs in the US.”

“I get your point. I saw Trump’s son-in-law high-fiving the National Security Adviser, H.R. McMaster.”
“And did you hear Trump talk about radical Islamic terrorism, human rights, or openly disparage Muslims the way he did during the campaigns? He didn’t. ”

“He mentioned something about radicalization and fanatical violence but he was obviously careful with words, and he played the politics of the region in a pragmatic manner.”
“You get it. Business is far more important than ideology or campaign rhetoric. In fact, Trump was practically sucking up to the Saudi Sunnis. That is a man who came to power condemning Muslims. That was sheer hypocrisy and opportunism at work. He played the same politics in Israel.”

“It is a fake world we live in. Fake Trump. Fake speech. It is sad though. While other countries are going round the world, looking for investments, Nigerian leaders are travelling here and there looking for marabouts and beautiful ladies with tribal marks!”

“And to think the social media is used to promote the fakery?”
“Social media?”
“Yes. It is a positive vehicle for democracy.”

“It is also a veritable vehicle for fake news. I am uncomfortable for example with the rise of twitter ghosts and masquerades.”
“I know what you mean. But there are remedies when people overdo things and violate other people’s rights. Twitter just sacked one twitter account called @SubDeliveryMan. The account has been used we are told, to invade people’s privacy, malign them and expose them to ridicule and yet the person behind the handle is totally anonymous.”

“Social media anonymity does not enhance democracy or free speech, it promotes mischief and the politics of hate. I am glad Twitter is doing something about it.”

“You know sometimes when I read what some people post on twitter. I wonder about their upbringing. I cringe. They just set out to hurt other people’s feelings.”
“Twitter has a responsibility to ensure that its platform is not abused by persons who have indecent motives.”

“The next account they should delete is @PObahiagbon. It is a fake account and Hon. Patrick Obahiagbon himself has said so. Identity theft is a crime.”
“You are sure it is not a parody account?”

“No. I also don’t like the idea of a parody account. It is easily abused. Free speech must be backed by a sense of decency and responsibility”

“The whole thing sounds like this marabout matter.”
“I think the real marabout matter in Nigeria is the on-going fake, auto-suggestive coup talk.”
“It shall be well with Nigeria.” 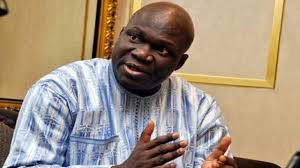