Politics Cardinal Okogie Speaks on Oritsejafor, CAN and President Jonathan

Past leader of the Christian Association of Nigeria (CAN) and former Catholic Archbishop of Lagos, Cardinal Olubunmi Okogie has heavy criticism for Ayo Oritsejafor.

"My brother, I must tell you this; CAN leadership today is zero. CAN has no leader," he said, describing Pastor Oritsejafor has having "fallen from grace to grass."

He said the Warri pastor is making a mockery of CAN by associating with President Jonathan and PDP. He said Oritsejafor's desire to remain in power and his 'romance' with politicians had totally derailed him from the essence of Christian leadership.

“Thank God you are talking to one of the founders of CAN, and I was there as their leader for eight years. Then, the whole country knew that CAN had a leader, not by my own might, but by God. Because what we were doing then, we had only one voice. But the problem we have now is that people are struggling for power in unrighteous way. And because he is struggling for power, he can do little or nothing.

“And we didn’t buy the position. But this time around, because they are rushing to be in power, nobody obeys them. And look at how they are making mockery of themselves and making mockery of “religion”. Is that religion? Today, they are with the federal government. We saw the writing on the wall when we left. The very first person that took over started romancing with Obasanjo. Then one or two CAN presidents tried their best before it got to this present CAN president, Oritsejafor. This is not right. Look at how Oritsejafor has fallen, from grace to grass.”

Mr. Okogie took a swipe at the CAN president over his link with the $9.3 million smuggled abroad purportedly to procure arms and seized by South African authorities. 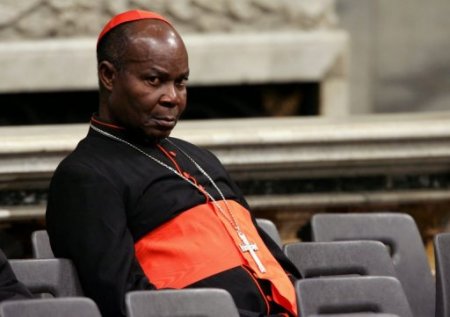