Curators
Chairman of Code of Conduct Tribunal (CCT) Mr. Danladi Umar has stated that his comment for the return of decree 2 to regulate the practice of journalism in the country was a joke.


Umar said that contrary to the impression created in the media, he did not advocate for the Decree to harass, intimidate or arrest journalist or any Nigerian for whatever reason. 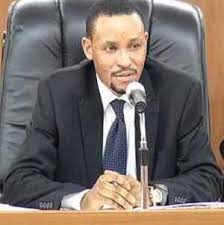 Umar had made a controversial comment at the end of Tuesday’s proceedings while pointing out a newspaper publication which said he adjourned the trial of the Senate President, Bukola Saraki indefinitely.

He said “Journalists should be punished for publishing falsehood, it is a criminal offence.

“If not that we are under a democratic setting, I would have advocated for the retention of Decree No. 2.

“Just because they want to sell their papers and make money‎ they publish falsehood.”

In a press statement yesterday, Public Relations Officer of the Tribunal, Ibrahim Alhassan, urged the public to regard the statement as a joke made in good faith and not to obstruct the practice of journalism in the country.

“The statement by the Chairman was made out of joke, not to intimidate any member of the Fourth Estate of the Realm in this country from observing their statutory functions as mandated by the Constitution of Federal Republic of Nigeria, as anchored in liberal democratic society like ours.


“The Chairman only cracked the joke following his discovery that some media organisations had in their report claimed that his tribunal had adjourned the trial of the Senate President, Dr. Bukola Saraki on false declaration of assets indefinitely.

“Similarly, we also wish to state that the Chairman never threatened our distinguished senator but only cautioned the people on the gallery to behave and to stop interjecting into the proceeding of the tribunal.