The Economic and Financial Crimes Commission, EFCC, has arraigned Ali Abdullahi, a personal assistant to the chairman of the Code of conduct Tribunal, Danladi Umar, for alleged fraud.

Abdullahi is facing a two-count charge for allegedly providing false information to the EFCC during the commission’s investigation of a case of false asset declaration by a former official of the Nigerian Customs Service, Rasheed Owolabi. 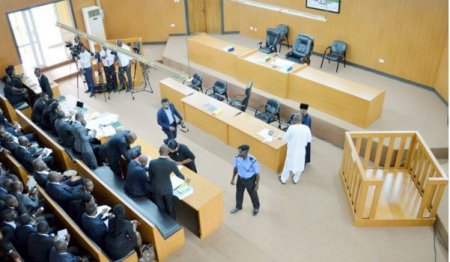 According to the first count of the charge, Mr. Abdullahi told the EFCC that N1.8 million collected from Mr. Owolabi was meant to assist his (Mr. Abdullahi’s) father’s medication.

But during a cross-examination, Mr. Owolabi said he paid the sum to the tribunal’s chairman, Danladi Umar, through a Zenith Bank account belonging to Mr. Abdullahi, with the account number: ‎ 1002849471.

Mr. Owolabi said he paid the money after Mr. Umar demanded N10 million to influence his case before the tribunal.

The case was adjourned to March 15.