Curators
The Senate President, Dr. Bukola Saraki, was worth $22m, £12m, €2.6m and N4bn in cash, movable and landed assets before he became Governor of Kwara State in 2003, his lawyer, Mr. Paul Erokoro (SAN), told the Code of Conduct Tribunal on Tuesday. 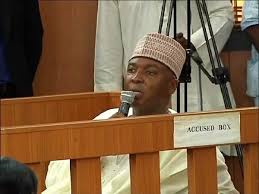 Erokoro said this while cross-examining the first prosecution witness, Mr. Michael Wetkas, in the ongoing trial of the Senate President.

Wetkas confirmed that there were 16 vehicles which cumulatively worth N263,400,000.

He confirmed that Saraki’s landed property was worth between N2.5bn and N3.5bn

He confirmed that Saraki’s cash was worth about N50m.

May 26, 2016
kemi
K
A
Politics PREMIUM TIMES: Inside the N10billion Assets Saraki Declared as Governor