Manchester City manager Manuel Pellegrini has taken a swipe at Chelsea,attributing their display when both teams clashed on Sunday to that of a: "small team".

Ten-man City came from behind to secure a 1-1 draw at the Etihad despite enjoying better possession than their opposition in the game.

Andre Schurrle had put Chelsea in front after Pablo Zabaleta was sent off in the game,and it looked as though the visitors were going to see out the game,making their numerical advantage count.

But it was former Chelsea player,Frank Lampard who was the clog in their wheels,scoring an equaliser for City to share the spoils.

"I think we played 90 minutes against a small team trying to defend," Pellegrini said after the match.

"I would not be happy to play that way. Ten players defended their own half, they scored a counter attack and they continued to defend until the end."
"I think we played against exactly the same team we played against Stoke here," he added. "It was very difficult for us to score but finally we did. The result is not what both teams did during 90 minutes.

"I don't want to analyse Chelsea. What the other teams do, it is not my duty to analyse." 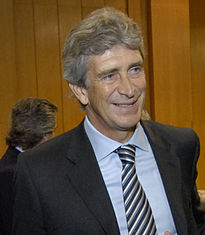