The Nation reported that the judge, in a judgment in a suit by Ahmed Gulak, a former political adviser to ex-President Goodluck Jonathan, held that Secondus was occupying the party’s chairmanship seat illegally. 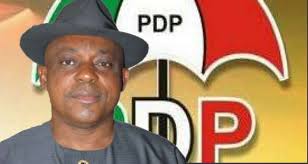 Justice Baba-Yusuf noted that Secondus was from Rivers State and not Northeast geopolitical zone to which the PDP zoned the position.

He gave Secondus 14 days within which to vacate the office and directed that the plaintiff or any other party member worthy of that position should take Secondus’ place.

Lawyer to the PDP and Secondus, Chuwan IsaiahPaul, said the party would appeal the judgment and seek a stay of its execution to allow the party’s leadership prepare for its national convention slated for March, next year.

Politics Atiku Vs Buhari: PDP Hands Over Case To ‘God’ After Losing At Supreme Court – Naijaloaded