The World Health Organization (WHO) defines female genital mutilation (FGM) as “all procedures involving partial or total removal of the external female genitalia or other injury to the female genital organs whether for cultural or other non-therapeutic reasons.”

FGM is recognized internationally as a violation of the human rights of girls and women. It reflects deep-rooted inequality between the sexes, and constitutes an extreme form of discrimination against women. It is nearly always carried out on minors and is a violation of the rights of children. The practice also violates a person's rights to health, security and physical integrity, the right to be free from torture and cruel, inhuman or degrading treatment, and the right to life when the procedure results in death. 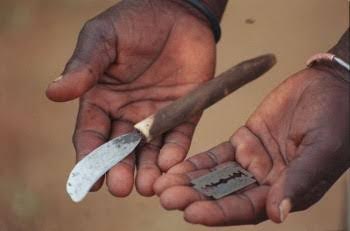 Type I: Also known as clitoridectomy, this type consists of partial or total removal of the clitoris and/or its prepuce.

Type II: Also known as excision, the clitoris and labia minora are partially or totally removed, with or without excision of the labia majora.

Type III:The most severe form, it is also known as infibulation or pharaonic type. The procedure consists of narrowing the vaginal orifice with creation of a covering seal by cutting and appositioning the labia minora and/or labia majora, with or without removal of the clitoris. The appositioning of the wound edges consists of stitching or holding the cut areas together for a certain period of time (for example, girls’ legs are bound together), to create the covering seal. A small opening is left for urine and menstrual blood to escape. An infibulation must be opened either through penetrative sexual intercourse or surgery.

Type IV: This type consists of all other procedures to the genitalia of women for non-medical purposes, such as pricking, piercing, incising, scraping and cauterization.

In a 2015 VANGUARD report, 6 states in Nigeria still practice FGM, with some of the reasons rooted in culture and tradition. Most times, the instrument used are crude and unsterilized, thereby endangering the women’s health.

Here is a look at some of the dangers/complications of FGM:

Haemorrhage is one of the most common complications of FGM, as excision of the clitoris involves cutting across the high pressure clitoral artery and attempts to stop bleeding may not be effective. Acute extensive bleeding can lead to haemorrhagic shock or even sudden death in the case of cataclysmic haemorrhage.

Shock may occur because of blood loss and the severe pain and trauma of the procedure. Both haemorrhagic and neurogenic shock can be fatal.

The majority of mutilation procedures are performed without anaesthetics and cause the girl severe pain. Even if a local anaesthetic is used, multiple insertions of the needle are often required.

Urinary Retention is very common and may last for hours or days. It is commonly due to pain, tissue swelling, inflammation, injury to the urethra, and fear of passing urine on the raw wound.

Injury to the urethra, vagina, perineum and rectum can result from the use of crude instruments, poor light, careless techniques, or from the struggles of the girl.

Infection commonly occurs for a number of reasons; unhygenic conditions, the use of unsterilized instruments, applications of traditional herbs or ashes to the wound, contamination of the wound with urine and/or faeces, or binding of the legs following infibulation which prevents wound drainage. Septicaemia and tetanus may also develop.

Fracture of the clavicle, femur, humerus or hip joint can occur if heavy pressure is applied to a struggling girl during the procedure - as often occurs when several adults hold her down.

Wounds may fail to heal quickly because of infection, irritation from urine, underlying anaemia or malnutrition.

Difficulties can occur due to damage to the urethral opening, obstruction of the urinary opening, or scarring of the meatus - and can lead to chronic incontinence or difficulty passing urine. For many infibulated girls, passing urine can take up to 20 minutes when they are still virgins.

Partial occlusion of the vagina and urethra means the normal flow of urine is deflected and the perineum remains constantly wet and susceptible to bacterial growth. Retrograde UTI's therefore commonly occur, affecting the bladder, uterus and kidneys. Damage to the lower urinary tract during the procedure can also result in urinary tract infections.

Partial occlusion of the vagina and urethra increases the likelihood of infection and ascending pelvic infections are common. The infections are often painful and may be accompanied by a noxious discharge spreading to the uterus, fallopian tubes and ovaries - and frequently become chronic.

Infertility can occur due to chronic pelvic infections causing irreparable damage to the reproductive organs.

Partial or total occlusion of the vaginal opening commonly results in dysmenorrhoea or amenorrhea. Haematocolpos occasionally occurs from the retention of menstrual blood due to the almost complete coalescence of the labia.

There is an increased risk of HIV transmission due to the use of the same unsterile instruments in-group circumcisions, repeated cutting and stitching during labour, and the higher incidence of lacerations and abrasions during intercourse.

---
fgm.co.nz contributed to this article.

Sexual Health Nimko Ali: ‘Orgasms and sexual pleasure are a human right. I guard these things with my life’ – The Guardian