The Special Assistant to Governor Emmanuel Uduaghan of Delta state on Information and Communication Technology (ICT), Mr Sunny Ofili, on Saturday died in an auto crash at Utulu near Asaba.

Ofili died along with the traditional ruler of Issele-Uku, Obi Henry Ezeagwuna II.

They died along the Benin-Onitsha highway when the vehicle they were travelling in rammed into a stationary lorry loaded with granite.

The deceased were heading towards Asaba from Issele-Uku in Ezeagwuna’s jeep. The car in which they were trapped was said to have somersaulted after hitting the lorry, and it later caught fire.

The accident caused a traffic gridlock on the other side of the highway as vehicles were forced to use only one lane.

The Secretary to the State Government, Mr Ovouzerie Macaulay, confirmed the incident.

"It is very sad and shocking,’’ he said. 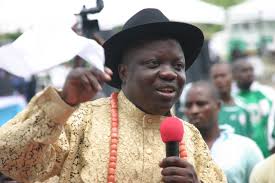