Senator Dino Melaye has accused Kogi State Governor, Yahya Bello of creating a N1billion war chest to have him recalled from the Senate. 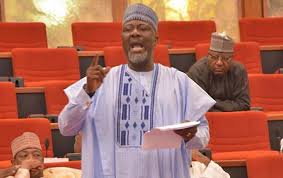 In a tweet from his Twitter hanle, Melaye wrote, ''Yahaya Bello: on recall of Dino Melaye, he is shooting the Moon and boxing the air. Spending over one billion naira tax payers money on an unproductive venture when salaries and pensions have not been paid is wicked.

“I will continue to defend the poor and defenseless masses of kogi state. If I die I die. We must rescue the state.”
F

Thanks to God you fighting for welfare of the poor. Yahya pay workers stop wasting our resources
V

Jul 9, 2021
Kayode Israel
K
K
Politics ”This must be a joke right?’- Nigerians react after Kogi Commissioner says there is a deafening call for Governor Yahaya Bello to run for president...