The Governor of Oyo State, Abiola Ajimobi, has urged the newly-appointed Minister of Communication, Adebayo Shittu to maintain his uprightness and honesty by imbibing the fear of God and refusing gift offers from contractors, individuals and corporate firms.

Ajimobi and the Chairman of Kakanfo Inn and Conference Centre, Dr. Lekan Are, gave the advice on Saturday during a reception organised for Shittu by friends at KICC, Ibadan. 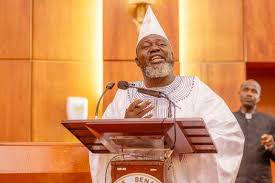 Are, who was the chairman of the occasion, said he had a great respect for the minister, and warned that he was inheriting myriads of problems in the mobile telephone industry. While urging him to work with an open mind, Are called on Shittu to beware of people who would approach him with gifts and bribes in order to have their ways.

Ajimobi said he was satisfied with the choice of Shittu even though it generated debate among party members when he was nominated by President Muhammadu Buhari.

He said, “Shittu is my good friend but after he was nominated, I had a meeting with him in my house and that was when we settled all differences.”

Politics “I Don’t Love Bayo Shittu, Why Should I When He’s Not A Woman” – Naijaloaded news

OYO 2019: Why Shittu, others’re angry with me — AJIMOBI – Vanguard News