A Nigerian drug smuggler who collapsed after cocaine bags inside his body split open was left to die, because airport staff refused to touch him fearing he had Ebola.

According to Daily Mail, The man collapsed in the customs area of the Madrid-Barajas airport outside the capital after arriving on a flight from Istanbul.

Upon hearing that the man was from Nigeria, staff were too afraid to approach the man and left him in shivers on the airport floor.

'A civil guard officer initially positioned the man on his side and identified him from personal documents.

'When it was clear he was a Nigerian, no one dared touch him.

'Medical staff decided immediately that there was a risk that this could be a case of Ebola.

It later transpired that the man was suffering the effects of a cocaine overdose after several bags of the drug burst in his stomach.

A passenger accompanying the Nigerian later told police that he had flown from Madrid to Istanbul on October 14 and had not been to Nigeria for four years. 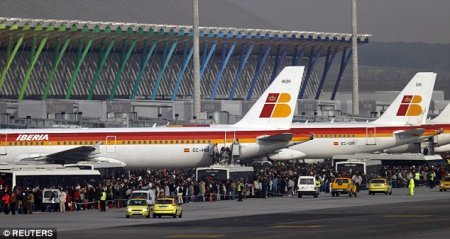