Ex-militant leader in the Niger Delta, High Chief Government Ekpemupolo, popularly known as Tompolo yesterday, broke his silence over the Seven-day ultimatum handed to him by the Economic and Financial Crime Commission (EFCC) to appear at its headquarters over alleged N13billion land deals under the past administration. 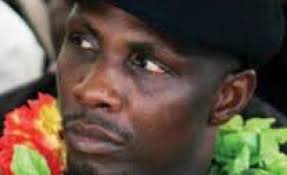 According to Tompolo, though the EFCC lied over claims that he refused to respond or honour the invitation extended to him by the commission, he said the EFCC’s recent ultimatum is diversionary, as he is actually being hounded by the All Progressive Congress (APC), over his refusal to join the party and support its flag bearer in Bayelsa State governorship election, Chief Timipre Sylva, against the Peoples Democratic Party (PDP).

I don't remember this guy belonging to any political party.

Fear of EFCC is the beggining of wisdom... He is playing an attacker game
I

Such people like you (Tampolo) are not wanted in APC. If you are clean y shouldn't be afraid of honouring EFCC invitation.