The Economic and Financial Crimes Commission on Monday re-arraigned a former Minister of Aviation, Femi Fani-Kayode, for an alleged fraud of N4.9bn.

Fani-Kayode was re-arraigned before a new judge, Justice Rilwan Aikawa, after he objected to being tried before Justice Muslim Hassan. 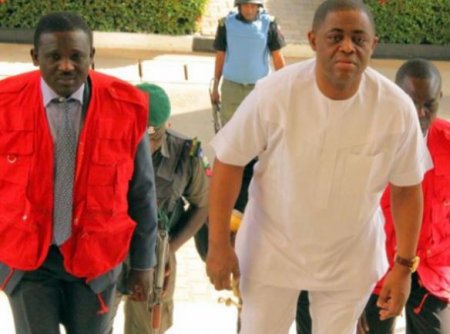 A former Minister of State for Finance, Senator Nenadi Usman; who was listed as the one defendant in the charge, one Danjuma Yusuf and a company, Joint Trust Dimensions Limited were equally re-arraigned before Justice Aikawa on Monday.

The 17 counts pressed against them border on conspiracy, unlawful retention of proceeds of theft and money laundering.

Following a plea by Usman’s lawyer, Mr. Abiodun Owonikoko (SAN), Justice Aikawa allowed them to continue on the bail earlier granted them by Justice Hassan and adjourned till June 6 and 9 for the commencement of trial.
O

EFCC, enough of media re-arraignment, please start doing the right thing according to the law, let all looters face the normal trials.

Na waoh, intimidation and political prisoner are not in line with the promise of change apc promised to Nigerians

apc are not fighting corruption as the claim, they're only revenge against opposition party pdp, that is what i understand on this government