Metro Emir Sanusi - Nothing In Nigeria Is About Tribe Or Religion,It's All About The Masses And Elites

Emir Muhammadu Sanusi II, the Emir of Kano in a series of Instagram posts writes about the division in the country. 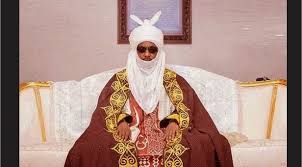 Let me start by saying that I am Fulani. My grandfather was an Emir also fulani my uncle and guardian was also the immediate late Emir of Kano Alhaji Ado Bayero and therefore I represent all that has been talked about this afternoon. Sir Ajayi has written a book. And like all Nigerians of his generation, he has written in the language of his generation.

My grandfather was a Northerner, I am a Nigerian. The problem with this country is that in 2009, we speak in the language of 1953. Sir Olaniwun can be forgiven for the way he spoke, but I cannot forgive people of my generation speaking in that language.

The Yoruba were Ijebu, Owo, Ijesha, Akoko, Egba. When did they become one? When did the North become one? You have the Sokoto Caliphate that brought every person from Adamawa to Sokoto and said it is one kingdom. They now said it was a Muslim North.

You talk about Babangida and the problems of our economy. Who were the people in charge of the economy during Babangida era? Olu Falae, Kalu Idika Kalu.

We started the banking reform; the first thing I heard was that in Urobo land, there will be a curse of the ancestors. I said they (ancestors) would not answer. They said why? I said how many factories did Ibru build in Urobo land? So, why will the ancestors of the Urobo people support her?
We talk ethnicity when it pleases us. It is hypocrisy. You said elections were rigged in 1959, Obasanjo and Maurice Iwu rigged election in 2007. Was it a Southern thing? It was not. The problem is: everywhere in this country, there is one Hausa, Ibo, Yoruba and Itshekiri man whose concern is how to get his hands on the pile and how much he can steal. Whether it is in the military or in the civilian government, they sit down, they eat together. In fact, the constitution says there must be a minister from every state.

So, anybody that is still preaching that the problem of Nigeria is Yoruba or Hausa or Fulani, he does not love Nigeria . The problem with Nigeria is that a group of people from each and every ethnic tribe is very selfish. The poverty that is found in Maiduguri is even worse than any poverty that you find in any part of the South.

The British came for 60 years and Sir Ajayi talked about few numbers of graduates in the North (two as at independence). What he did not say was that there was a documented policy of the British when they came that the Northerner should not be educated. It was documented. It was British colonial policy. I have the document. I have published articles on it. That if you educate the Northerner you will produce progressive Muslim intellectuals of the type we have in Egypt and India. So, do not educate them. It was documented. And you say they love us (North) more than the south.

I have spent the better part of my life to fight and Dr. (Reuben) Abati knows it. Yes, my grandfather was an Emir. Why was I in the pro-democracy movement fighting for June 12? Is (Moshood) Abiola from Kano ? Why am I a founding director of the Kudirat Initiative for Nigerian Development (KIND)?

There are good Yoruba people, good Igbo people, good Fulani people, good Nigerians and there are bad people everywhere. That is the truth. Stop talking about dividing Nigeria because we are not the most populous country in the world. We have all the resources that make it easy to make one united great Nigeria . It is better if we are united than to divide it.

Every time you talk about division, when you restructure, do you know what will happen? In Delta Area, the people in Warri will say Agbor, you don’t have oil. When was the Niger Delta constructed as a political entity? Ten years ago, the Itshekiris were fighting the Urobos. Isn’t that what was happening? Now they have become Niger Delta because they have found oil. After, it will be, if you do not have oil in your village then you cannot share our resources.

There is no country in the world where resources are found in everybody’s hamlet. But people have leaders and they said if you have this geography and if we are one state, then we have a responsibility for making sure that the people who belong to this country have a good nature.
So, why don’t you talk about; we don’t have infrastructure, we don’t have education, we don’t have health. We are still talking about Fulani. Is it the Fulani cattle rearer or is anybody saying there is no poverty among the Fulani?”.

LESSONS FROM THIS MESSAGE

Tribalism is not our problem. Tribalism and religion are artificial problems created by selfish leaders for their own personal interest.

There are only two major tribes in Nigeria. The Elites and the Masses. Once you make lots of money, you belong to the elite tribe. When you are a commoner or suffering, you belong to the tribe of the masses. If you are an elite, and you need more power, or elective position, you sow seeds of tribalism and religion among the masses, so as to sway their emotion for your personal victory. This happens at both the national and state level. Unfortunately, after the election when they have won and joined their “sworn enemies” to drink and party, the gullible masses continue to fight each other.

Even smart people who belong to the masses, sometimes will sow seeds of tribalism and religion among the masses, and then the masses will carry them up until they belong to the elite class. It is a classic strategy used over 3000 years ago in the art of war. A commoner who aspires to sit with the elites, could stir up powerful tribal or religious sentiments, such wave if properly utilized either by shedding blood or destabilizing the elites, carries the commoner to the elite class. But once there, he immediately mingles and makes peace with the elite tribe, and turn his back on the same masses that helped him get there.

So youths, don’t hope on the government. If you don’t have a job, create one. There is abject poverty in the south as well as the north, whether Ogoni or Maidugri. At the same time, there is massive wealth in Lagos, Onitsha, Nnewi, Aba, Kano, Abuja, irrespective of zone.

Whatever your hand finds to do, do it well and never remain idle. No job is too low for an idle hand, or else the devil will find work for you. As you become independent, and grow your capacity, do not lose hope in Nigeria. We are the largest economy in Africa and soon the world will fear us. Western powers, don’t like big economies that threaten them, America will do anything to break China, but China is wise to resist that. China has 1.6 billion people, we have only 170 million, and we are talking of breaking.

America, the strongest economy is comprised of every tribe in the world, since they accept anybody from any part of the world. Yet they are united and extremely patriotic. Nigeria has only 3 major tribes, and we claim tribalism.

Think clearly and deeply, and you will realize that empowering yourself is the best course of action, not fighting each other. And once the youths are empowered, they can begin to take back their future from the hands of the old and corrupt generation that has been blinding Nigerians with hatred, while looting all her resources. Sani Abacha’s loot is still stashed away in Switzerland, did he use it to develop the north? Those that stole billions under GEJ stashed it away in foreign banks, bought expensive toys, jets and foreign homes, are they using it to develop the south? Now the ones stealing currently, including the “grasscutters”, are looking for Ikoyi apartments, abandoned houses, and pit toilets to hide it, are they using it for the youths in their tribe? NO!

Youths shine your eyes ! Don’t always fall for this tribal, religious sentiments over and over again. Nigeria is bigger than these corrupt elites. They are the problem, not the poor masses.
Thank you all!

He should probably review some of his past essays
L

curator said:
He should probably review some of his past essays
Click to expand...

He's human. Since becoming Emir, he's had a change of heart.

Lequte said:
He's human. Since becoming Emir, he's had a change of heart.
Click to expand...

He has not changed any part of his anatomy.

“When someone shows you who they are, believe them the first time.” ~Maya Angelou
A

curator said:
He has not changed any part of his anatomy.

“When someone shows you who they are, believe them the first time.” ~Maya Angelou
Click to expand...

People are not allowed to outgrow certain views?

Jules said:
People are not allowed to outgrow certain views?
Click to expand...

He was a grown man when he made the statements.
E

curator said:
He has not changed any part of his anatomy.

“When someone shows you who they are, believe them the first time.” ~Maya Angelou
Click to expand...

But it is difficult to teach an old dog new tricks especially when they believe there position has been arrived out through some intellectual process.

You are free to believe him if you want to.

K
Metro “Whether you like or not, Jesus is coming soon” – Emir of Bauchi says as he host Christians at his Palace – Information Nigeria

Metro Emir Sanusi to beggars: If you must beg, beg govt not individuals – P.M. News