WHEN the Australian negotiator, Dr Stephen Davis, alleged that an unnamed top official of the Central Bank of Nigeria (CBN) was among the sponsors of the Boko Haram insurgency in Nigeria many people took his words with a pinch of salt as he had also named a former Chief of Army Staff, retired Lt Gen Azubuike Ihejirika, and former Governor Ali Modu Sheriff.

Nigeria’s Nobel Laureate, Professor Wole Soyinka, has added his voice to this allegation, affirming that his own independent inquiries showed that the same individual is indeed culpable. He went on to say that the name of the person has been made available to the highest authority in the land.

The question on the lips of Nigerians is: who is this person? What is so special about him that he cannot even be named? Why can’t he be brought out for the public to see the person who has helped in sending thousands of Nigerians to their early graves while the nation is faced with the greatest threat to her unity since the Nigerian civil war nearly fifty years ago? Why has the CBN remained mute about this issue, since its name is being dragged to the mud? Why hasn’t the CBN seen it fit to tell Nigerians what it knows about this matter? 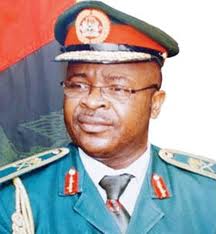