Metro Fani-Kayode, Falae, Udenwa and Others Named in N3.145bn Fraud

The Economic and Financial Crimes Commission, EFCC on Monday claimed to have uncovered evidence showing how N3.145bn was transferred to the private accounts of some members of the Peoples Democratic Party Presidential Campaign Organisation. 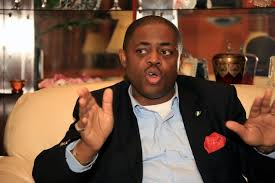 PREMIUM TIMES reports that named in the alleged bazaar are a former aviation minister and director of media for the Goodluck Jonathan Campaign organization, Femi Fani-kayode; former Secretary to the Government of the Federation and leader of the Social Democratic Party, Olu Falae; a former finance minister, Nenadi Usman; a former Imo state governor, Achike Udenwa; former minister of state for foreign affairs, Viola Onwuliri and politician Okey Ezenwa.

''It was from the Joint Dimension’s account with Zenith Bank that the money was shared to various individuals and organizations for purposes that are not stated''.

Fani-Kayode is named as the chief beneficiary of the disbursement, allegedly receiving a whooping N840million, paid in three tranches into his Zenith Bank, Maitama branch, with number 1004735721.

Former Secretary to the Government of the Federation and National Chairman of the Social Democratic Party, Chief Olu Falae, received N100m through a company, Marreco Limited, where he is chairman. The fund was credited into the company’s United Bank for Africa Plc account number 1000627022 on March 25, 2014.

Mr Falae, investigators said, received N100m through Marreco Limited, a company whose board he chairs.
The fund was credited into the company’s United Bank for Africa Plc account No. 1000627022 on March 25, 2014. Both Achike Udenwa and Viola Onwuliri got N350million in two tranches.

Metro EFCC vs Fani-Kayode: What happened in court on Friday – Daily Post Nigeria

Metro Igbos Are The Most Vilified, Humiliated And Persecuted Tribe In Nigeria – INFORMATION NIGERIA