Minister of works, power and housing, Babatunde Fashola has said that unveiled the Federal Government’s established plans to build road and bridge network across the country as well as the order of priorities in which they would be built through a revolving plan in the next three years 2017- 2019.

Fashola reiterated that the intention was to connect states, drive economy, move fuel, food and import and export of goods.

The Minister said in addition to the plan for 44 Federal Highways construction contained in the 2017 Budget, government has also identified 63 roads in the First Quarter of the year that were identified and prepared for emergency intervention across the country ahead of the rainy season to give relief to Nigerians subject to appropriation.

According to the Minister, the 63 roads were identified and prepared for intervention during the inspection tour of roads in 34 states of the Federation by the Ministry which he personally led.

He said for the purpose of effective implementation, the Federal Government has classified the roads into Critical Economic Routes and Agricultural routes to include all roads traversing geopolitical zones, advancing trade and commerce across the states and leading to the ports as well as those passing through agricultural areas across the country.

Noting that the road projects are spread out in such a way that no zone has been left out, Fashola listed the proposed priority highway projects slated in the 2017 Budget to include Kano-Katsina Road (Phase 1: Kano Town at Dawanau Roundabout to Katsina State Border), Sokoto-Tambuwal-Jega-Yauri Road, Ilorin-Jebba-Mokwa-Bokani Road, Ilorin-Kabba-Obajana Road (Sections 1&11), Ibadan-Ilorin Road, Section11 (Oyo-Ogbomosho), Lagos-Shagamu-Ibadan Dual Carriageway, Sections 1&11 and Lagos-Otta Road. 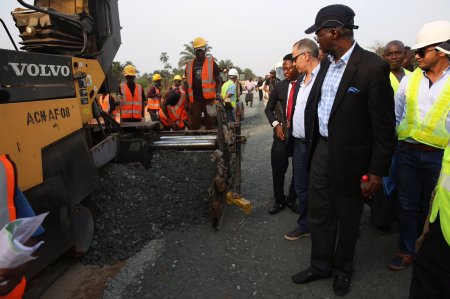 According to the Minister, roads that pass through agricultural areas across the country include Sokoto-Tambuwal-Jega-Kontangora-Makera Road (Sections 1&11), Makurdi-Naka-Ndoka-Ankpa Road, Akure-Ondo-Ore Road and Benin-Sapele Highway. Rubber Research Institute of Nigeria-Iyanomo Road.

Construction of bridge at KM 32 along Billiri Filiya in Taraba and the repair of Billiri-Filliya Road in Gombe, Potiskum-Agalda-Gombe State Border (S/B) and Potiskum-Kari-Bauchi S/B Road in Yobe State.

In the North West:

In the South West