The Minister of Foreign Affairs Geoffrey Onyeama has called for a joint declaration by the African Union and European Union on the issue of slave trade and other crimes against humanity in Libya.

Onyeama, at the ministerial meeting of the 5th African Union- European Union Summit in Abidjan, Cote d’ Ivoire, said slave trade “should be a redline for us and indeed for mankind.” 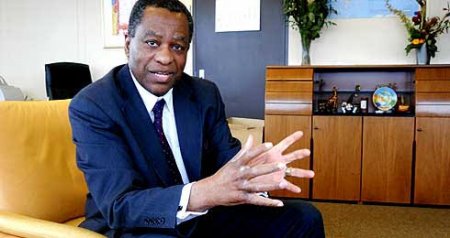 The minister also called for increased Foreign Direct Investment in Africa by European countries as a way of creating millions of new jobs for youths in Africa.

“The AU-EU collaboration should focus more on addressing issues of youth unemployment and the associated skills gap, by promoting quality education and skills development, entrepreneurship, industrialisation as well as access to finance, safe and orderly regular migration and better alignment of skills with labour market needs between the two continents,” he said.

He however commended the granting of over 100 million Euros from the AU-EU Infrastructure Trust Fund for the execution of projects that will revolutionise the Transport, Water and Energy sectors in Africa.

“We are also encouraged by EU support of 7.5 million Euros for the Continental Free Trade Area (CFTA) negotiations, which have been very useful in providing technical support and expertise towards realising the target for the conclusion of the negotiations by the end of 2017, as well as the 20 Billion Euros spent by the European Union in Africa every two years as stated by Federica Mogherini, EU High Representative and Vice President of the EU Commission.”

Onyeama also commended the on-going civilian and EU led operations in Africa, particularly in the area of anti-terrorism, but noted the need to build capacities of the nation’s security operatives and called for increased financial support to the Multi -National Joint Taskforce (MNJTF) operations.

While acknowledging that the EU has been very supportive in promoting Aspiration 4 of the Africa Agenda 2063 for a peaceful and prosperous Africa, Onyeama emphasised “our partnership should continue to ensure the fill functioning of the African Peace and Security Architecture (APSA), especially the operationalisation of the African Standby Force (ASF), as well as promote conflict preventive diplomacy.