The Federal Government has reiterated its resolve at developing strategies that will put an end to the menace of the Boko Haram insurgency confronting the nation.

President Muhammad Buhari, represented by Chief of Defence Staff, Lt. General Gabriel Abayomi speaking at the Chief of Army Staff annual conference 2015 taking place in Dutse, Jigawa said despite achievements made by the Nigerian Army intellectuals, the threat of terrorism in some parts of the country remains an issue of serious national concern. 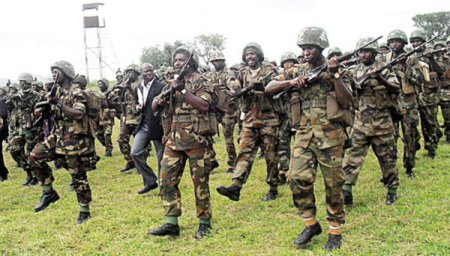 The President noted that the recent achievements of the security agencies in the fight to defeat terrorism underscored his earlier position that the Boko Haram threat will soon be a thing of the past, adding that the military achievement “has shown that the Nigerian Army has been working assiduously to implement and carry out my directives to rout the insurgents by the end of this year.”

The Chief of Army Staff, Lt. General Tukur Buratai explained that the security challenges witnessed in the country in the area of Boko Haram insurgency has posed a serious threat to national security, adding that “this has placed great demands on the Nigerian Army which has not relented in living up to the expectations of the nation’s citizenry.”