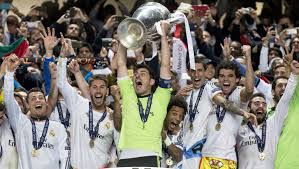 Sergio Ramos fired Real Madrid into a 15th-minute lead to cap a bright start from Zinedine Zidane’s side. After breaking Atletico hearts with a stoppage-time equaliser in an eventual 4-1 extra-time victory when the two sides met in the 2014 final in Lisbon, Spain international Ramos delivered another painful blow to Real’s city rivals. Toni Kroos’ whipped free-kick was flicked on by Gareth Bale with Ramos lunging to poke the ball past Jan Oblak from inside the six-yard box. Replays showed he was offside. But Ramos joined Lionel Messi, Cristiano Ronaldo, Samuel Eto’o and Raul as the only players to score in two Champions League finals.

Antoine Griezmann spurned a glorious chance to equalise for Atletico when the France striker crashed his penalty against the crossbar with the second half just three minutes old. Pepe bundled over Fernando Torres inside the area less than 60 seconds after the restart, but Griezmann, who had already seen a spot-kick saved by Keylor Navas during a 1-1 draw in the league in October, drilled his effort against the woodwork. Griezmann became the fifth player in European Cup/Champions League history to miss a penalty in the final and the first since Arjen Robben for Bayern Munich against Chelsea in 2012.

Having made a stunning sixth-minute stop to deny Casemiro, Atletico goalkeeper Jan Oblak again twice came to Atletico’s rescue as Real sought to grab a crucial second goal. First, the Slovenia international spread himself well to smother a Karim Benzema effort on 70 minutes as Real broke on the counterattack. Eight minutes later Oblak then blocked at the feet of the competition’s record goalscorer Cristiano Ronaldo, with Gareth Bale then seeing a follow-up shot cleared off the line by Stefan Savic.

Half-time substitute Yannick Carrasco popped up with the equaliser to make it 1-1 on 79 minutes. The Belgium international, who replaced Augusto Fernandez at the interval, slid in at the far post to convert a superb volleyed right-wing cross from Juanfran. It was Carrasco’s first goal in Europe this season as the 22-year-old also became the first Belgian player to score in a European Cup final.

Cristiano Ronaldo shook off an underwhelming display over 120 minutes in Milan to score the winning penalty in the shootout. All seven players had scored before Juanfran, who himself scored the decisive spot-kick when Atletico beat PSV Eindhoven in the last 16, struck the base of the post. That left Ronaldo to take centre stage to clinch the title. The Portuguese made no mistake, coolly slotting past Oblak to secure a record 11th European crown for Real Madrid.