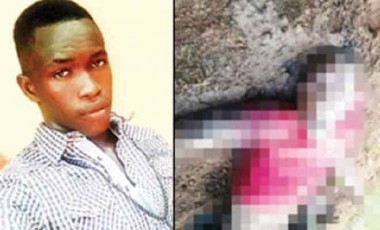 Tongues wagging and frowning in Calabar, Cross River State as Police are yet to arraign in court a dismissed staff of the Nigeria National Petroleum Corporation, NNPC, who allegedly shot dead a 22-year-old secondary leaver, Douglas Ochaga Ojugbo for hitting it off with is daughter.

Health officials from Calabar Urban Development Authority had buried the remains of Douglas, who was preparing to write his 2015 JAMB UTME examination, in the orders of the Divisional police Officer, DPO, in the area without identifying him.

However, family of the deceased described the claim by the police and their son’s killer as a cock and bull story. Mother of the slain boy, Mrs. Maria Ogar Ojugbo, a director at the Fishery Unit, Ministry of Agriculture, Calabar, told Niger Delta Voice that her son went to collect money for a mini-notebook he sold to the man’s daughter, Mercy, when the assailant killed him.