Curators
Andy Murray will attempt to become the first British winner at Roland Garros since 1935 as he plays in the final of the French Open. 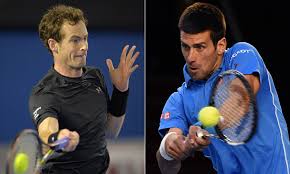 Standing between him and the trophy - the famous La Coupe des Mousquetaires - is World No 1 Novak Djokovic.

Neither has won the tournament and the battle will mark a test for Murray to prove he can beat the best on clay when the stakes are high.

For Djokovic, the French Open title has been dangling tantalisingly out of reach ever since he reached his first grand slam semi-final at the tournament nine years ago.

Murray termed the game "a very big match" for both of them.

"Novak is trying to win the career slam, it's obviously a huge match for him, and me trying to win my first French Open," he said.

Although Murray has only won 10 of his 33 meetings with Djokovic the Scot's development into a true clay-court player has been one of the most impressive feats of his illustrious career.

It could yet see him become the first British men's singles champion at Roland Garros since Fred Perry 81 years ago.

Sports Djokovic crashes out of US Open, booed by crowd – P.M. News