The National Association of Nigerian Students, Imo State Chapter, has shut down the streets of Owerri the capital of Imo State, causing heavy gridlock and carrying placards with various inscriptions.

The youths in their numbers staged a peaceful protest against the recent hike in the price of Premium Motor Spirit (PMS) also referred to as petrol by the Federal Government.

They expressed their support for the planned strike by the Nigeria Labour Congress against the increase of the price of PMS from 86.50 Naira to 145 Naira per litre.

Recall that the Nigerian government announced a new price regime of 145 Naira per litre on May 11, which some stakeholders kicked against and the NLC issued a four-day ultimatum for reversal. 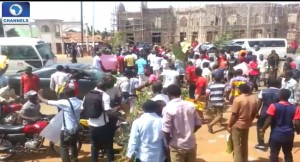 According to the protesting students the All Progressives Congress (APC) is delivering what is contrary to their campaign promises as regards the fuel price issue.

The students during the protest also called on the Imo State government to resolve the lingering crisis between the government and Academic Staff Union of Universities, Imo State Chapter which they claimed had kept the Imo State University under lock and key for months, keeping students idle and non-productive.