An Ondo High Court sitting in Akure has sentenced to death by hanging the two men who killed Professor Albert Ilemobade, the former vice chancellor of the Federal University of Technology, Akure, thesunshinetimes reports.

David Ita Enang and Olayemi Bamitale were both found guilty for the murder of the late Prof Ilemobade at his residence in Ijapo area of Akure, Ondo State. 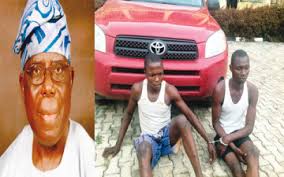 Justice Olamide Williams in delivering his judgment sentenced the two accused to death by hanging, after the prosecuting counsels led by Adesola Tuki had proved beyond reasonable doubt that Prof Ilemobade was actually murdered by Enang and Bamitale, for selfish gains thus dismissing all attempts by the defense counsel to save their heads.

Albert Ilemobade was a professor of veterinary medicine.