Despite losing election to Adama Barrow, and in face of pressure from West African leaders, Jammeh insists ‘nobody can deprive me’ of presidency

Jammeh initially accepted the results of the 1 December election, whose outcome was seen across Africa as a moment of hope. He is accused by human rights groups of the detention, torture and killing of perceived opponents during his 22-year rule.

On 9 December, he reversed his position and said he would challenge in the country’s supreme court the results of an election he said was riddled with irregularities.

1. After first accepting defeat he reversed his position and said he would not step down. He declared a 90-day state of emergency, blaming irregularities in the electoral process.

2. The electoral commission accepted that some of its early results had contained errors but said they would not have affected Mr Barrow's win.

3. He wants a new count and/or new election and vow to stay in office until then.

4. Remaining in power would also give him protection against prosecution for alleged abuses committed during his rule

5. He said Gambian Supreme court must hear his case against election irregularities 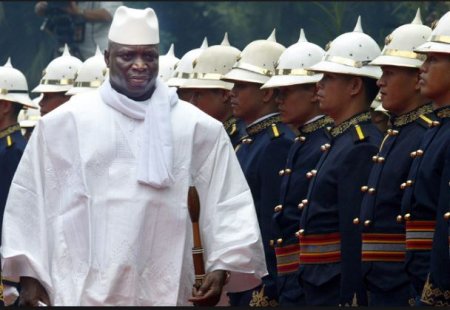 6. He said: “for the first time in the history of Gambia over 360,000 people out of over 800,000 registered voters did not turn up and needs an explanation for such Voter apathy.

7. He is faulting how the Electoral institution corrected this statement: “The tabulation of the 2016 Presidential election results from 53 constituencies was done correctly. Furthermore, regional election results were also tabulated correctly from Banjul to Basse Administrative Areas. However, when the total votes per region were being tallied, certain figures were inadvertently transposed.
“Instead of adding the total number of votes polled by Adama Barrow in Basse administrative area, the IEC added the total number of ballots cast for Basse administrative area to Adama Barrow’s total number of votes thus swelling the number of votes Mr Barrow polled nationally. This error was repeated across for other contesting candidates. Having noticed this, the error is now corrected and this is the actual results.”

8. Yahya Jammeh said the West and leaders hate me because he refused to worship them. NigerianBulletin.com recall that Jammeh has promised to die rather than bow to the imperial powers of the West.

“Their problem in Africa is Yahya Jammeh and other heads of state and I stand to die for what I believe in. Because you are white or whatever colour doesn’t mean that I should worship you. Those days were gone when were their slaves and colonies and they were our colonial masters”, he told members of the African Bar Association at State House, Banjul after making a U-turn on the election result.