The Golden Eaglets of Nigeria on Saturday thumped Gabon 5-0 to qualify for the African under-17 Championship that will be hosted in Niger Republic next year.

It was a game they needed to win,and the Golden Eaglets didn't disappoint,overturning a 2-1 deficit from the first leg to qualify 6-2 on aggregate score.

Kelechi Nwakali got Nigeria's first goal in the 20th minute,converting from the spot to put his team ahead.

Ebere Osinachi netted a brace before the end of the first half to increase Nigeria's lead in the game.

And the win was made sure after Kehinde Ayinde got his own double in the second half to take the scores at 5-0.

Coach Emmanuel Amuneke has said that the team will now go on a break and come back later to properly prepare for the tournament.

“Now that we have qualified, everybody will now go home and meet their loved ones; after that, we will come back and begin the preparations for the championship

“I thank the Cross River Government for its support and Calabar fans for being there for us always,” he said. 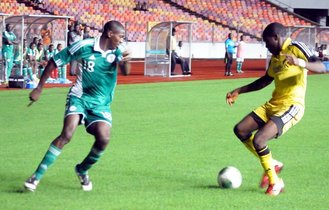