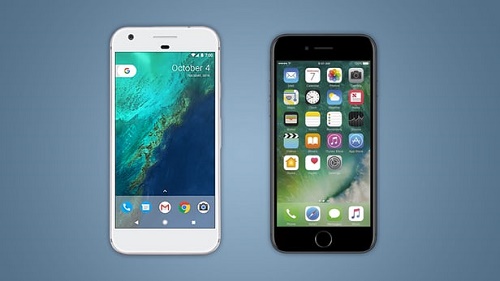 With the epic failures of Android lines such as the Galaxy, it seemed like the path was clear for the iPhone to re-establish its dominance over the smartphone industry. But when Google announced it was releasing its Pixel smartphone, consumers decided to wait and see what Google had to offer.

It turns out that Google updated the Android operating system and added features that are similar to the iPhone, which is something customers have wanted. But Google did more than just add features to compete with the iPhone, Google took everything that was good about the Android and made it better. Now it looks like Apple may, once again, have competition in the smartphone industry that is too much to handle.

The iPhone has great features like allowing families to share applications and offering a high quality camera in a phone format. But Apple has, from day one of the iPhone, had an iron fist about allowing users to do whatever they want with their phones. Apple constantly forces users to use its iCloud service for storing photos and videos, and it is impossible to do anything on the iPhone without first getting Apple's approval by entering your password.

Android users who switched to iPhones found the constant need to enter their password annoying, and they were also turned off by the inability to personalize an iPhone without paying a lot of money. Almost every iPhone app costs something, and the selection of apps for the iPhone is small compared to the Android system.

The Versatility of the Pixel

Google has put family app sharing on the Pixel, but it still needs work. The Galaxy line was plagued with technical issues that eventually saw the popularity of the line disappear. Google has repaired those errors, and added more versatility to the Android OS.

The Pixel allows you to store your data on any cloud platform you want, and the Pixel also has several more options for allowing users to customize their phones. Even something as simple as changing a ringtone on the iPhone requires a four-step operation. It is much simpler to make changes on the Pixel than it could ever be on the iPhone.

With the iPhone, you cannot add any app that is not sold on the Apple app store. With the Pixel, you can download and use any app you want from any source. The Pixel, as with other Android devices, does not require a password to execute every function, and the Pixel has dramatically streamlined the OS upgrade process.

The Pixel is a quality smartphone that offers versatility and freedom to the user. The iPhone still maintains tight control over what a user can download, how the user's phone looks and how the user's phone operates. After just one day with the Pixel, any iPhone user will realize just how little freedom they have when they use an iPhone.

Is the Pixel the iPhone killer? The tech media is already heralding the arrival of the Pixel as the next step in smartphone technology. Apple's desire to maximize profits on its iPhones has created a situation where users are forced to choose from a limited amount of options, and the iPhone forces users to stay solely within the Apple universe. The versatility and user friendly nature of the Pixel are definitely going to give the iPhone a run for its money.

---
This article appears as part of the Nigerian Bulletin Weekly (NB Weekly)
Click here to Download your free copy now
Last edited by a moderator: Feb 12, 2017

Curators
How much is it?
P

Besides, your salary is in Naira - (Asiwaju Bola Tinubu) and the phone price is in Naira. All things being equal, you can still afford the gadget. It has awesome features.
M

ese said:
How much is it?
Click to expand...

The battery capacity is a drawback
N

Thats the differences between an open software and a closed one.
Join me on Nigeria info
P

nigerian naira said:
Thats the differences between an open software and a closed one.
Join me on Nigeria info
Click to expand...

I don't like them because the price and battery level are too poor.
S

I really, really, really want one but not during this recession..!
https://vidmateapp.win | https://voicetap.in | Kolkata ff
Last edited: Aug 4, 2021
F

Ever since the release of the Google Pixel 3, Google has managed to disappoint most hardcore fans of the company with every generation of phones they release. Whether it’s an ugly notch, outdated technology, an unreasonably high price, or catastrophic battery life, each generation since then has fallen short in some way.shareit vidmate app
Last edited: Nov 1, 2021
S