Governor Abiola Ajimobi has described Alao Akala as a formidable force, noting that the coming together of both of them would make them the most formidable force in the politics of the state.

For the first time since his reported membership of the All Progressives Congress (APC), former governor of Oyo State, Chief Adebayo Alao-Akala, has remarked that he was set to finalise the processes of joining the APC. 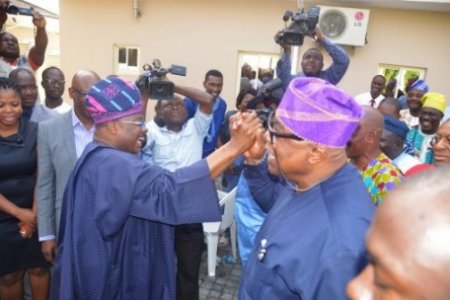 Alao-Akala, speaking just after the Appeal Court sitting in Ibadan, reaffirmed the victory of Governor Abiola Ajimobi at the April 11 polls, said he was “dotting the I’s and crossing the T’s.”
Ajimobi noted that the partnership meant that any other opposition was inconsequential.

“Former governor Alao Akala is a formidable force. He is a force to be reckoned with in the politics of Oyo state and in Nigeria, in general.”

When two enemies formed a common front, one must be whatchful .

Which one do you think should be watchful?

Politics I’m A Sellable, Acceptable Candidate And Know Where To Continue From After Ajimobi, Says Alao-Akala – Sahara Reporters

Politics Ex-Governor Alao-Akala: Why I did not accept PDP’s guber ticket – TODAY.NG