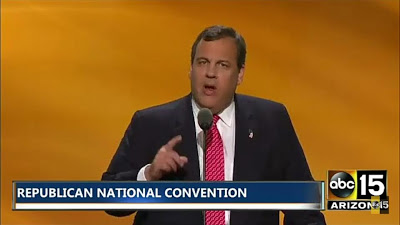 Speaking at the Republican National Convention Tuesday night in Cleveland, Governor Christie said, ''Over the last eight years, we have seen this Administration refuse to hold her accountable for her dismal record as Secretary of State.

''Well, tonight, as a former federal prosecutor, I welcome the opportunity to hold her accountable for her performance and her character. We must present those facts to you, a jury of her peers, both in this hall and in living rooms around our nation.

''Since the Justice Department refuses to allow you to render a verdict, let's present the case now, on the facts, against Hillary Clinton. She was America's chief diplomat. Look around at the violence and danger in our world today every region of the world has been infected with her flawed judgment.

''But let me be specific so you can render your verdict. In North Africa, she was the chief engineer of our disastrous overthrow of Qaddafi in Libya. Libya today after Hillary Clinton's grand strategy? Libya's economy in ruins, death and violence in the streets and ISIS now dominating the country.

''Hillary Clinton, as a failure for ruining Libya and creating a nest for terrorist activity by ISIS guilty or not guilty? In Nigeria, Hillary Clinton amazingly fought for two years to keep an Al-Qaeda affiliate off the terrorist watch list.

''What happened because of this reckless action by the candidate who is the self proclaimed champion of women around the world? These terrorists abducted hundreds of innocent young girls two years ago. These schoolgirls are still missing today.

''What was the solution from the Obama/Clinton team? A hashtag campaign! Hillary Clinton, as an apologist for an Al-Qaeda affiliate in Nigeria resulting in the capture of innocent young women guilty or not guilty? She fights for the wrong people.