Bring Back Our Girl Campaign organization have come after the New Jersey Governor Chris Christie for blaming presumptive Democratic presidential nominee, Hillary Clinton for the kidnap of the Chibok school girls in North-East Nigeria

Yesufu, one of the foremost campaigner, said on her twitter handle that: “If @GovChristie says it's his country's fault #ChibokGirls were abducted what did he do to make a difference and #BringBackOurGirls”. 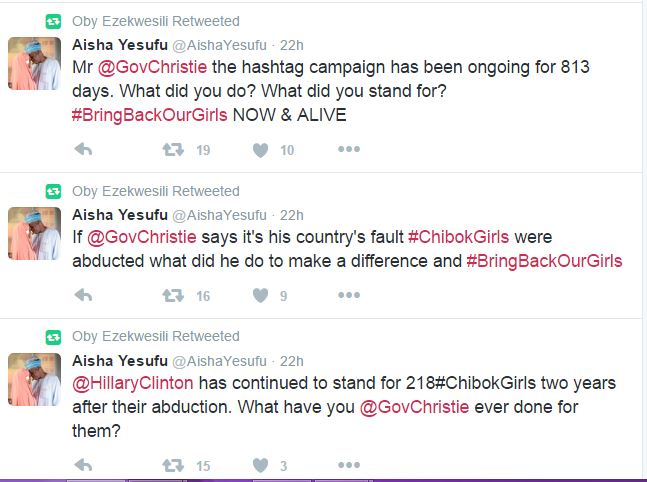 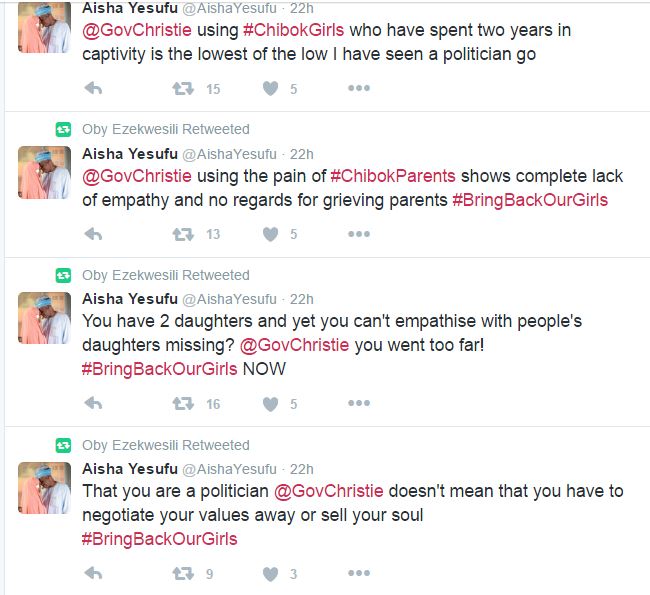 We write this letter as a statement of utmost displeasure with a part of your speech at the Republican National Convention. While you did not refer to us by name, in providing an assessment of the Democratic Candidate, Hillary Clinton, you made a passing comment – in an utterly dismissive tone – about a hashtag campaign in the fallout of the abduction of schoolgirls in Nigeria.

This hashtag, (#BringBackOurGirls), and the movement that drives it, remains the only consistent voice for 218 abducted young girls who have today been in the custody of their captors for 829 days. As a father of two girls, the thought of having yours in these conditions must surely be a source of horror. In those circumstances, we are certain your opinion of such a movement and utterances towards the campaign would be more measured. It is therefore highly disappointing and unfortunate that a two-time Governor and Candidate of the recently concluded Republican Presidential Primary of the United States of America would choose to play politics with the plight of innocent girls.

We take this opportunity to remind you, and other political leaders who may entertain such thoughts, that our #ChibokGirls are global citizens; with equal rights as other citizens of the world, with families that grieve daily, and are from a part of the world that is currently experiencing one of the worst humanitarian crises ever. The least you should be doing is drawing attention to the urgent need for ensuring their rescue and driving actions that will lead to better outcomes for the victims of the insurgency.

We therefore demand a public apology, accompanied by a heartfelt Global Call to Action for the rescue of our #ChibokGirls and all other citizens of the world who are being held against their will. This will be the only indicator that you truly believe in the American values of freedom of life, love and the pursuit of happiness.

For and on behalf of #BringBackOurGirls