A 43-year-old man, Opeyemi Adesina, who allegedly paraded himself as a consultant gynaecologist with the Lagos University Teaching Hospital, Idi-Araba was arrested on Tuesday by the Alakara Police Division in Alapere, Ketu area of Lagos state.

PUNCH gathered that Adesina, who hails from Ekiti state was arrested after his landlord, identified only as Akorede, wrote a “save-my-soul” petition to the management of LUTH some weeks ago alleging that Adesina brought home female patients to treat in his house and did abortions for them, among other unwholesome practices which could implicate him (the landlord).

Adesina told PUNCH how he paid N100,000 to one Kolawole in Ibadan, Oyo State, to get the certificates, adding that he had used them for only three years. 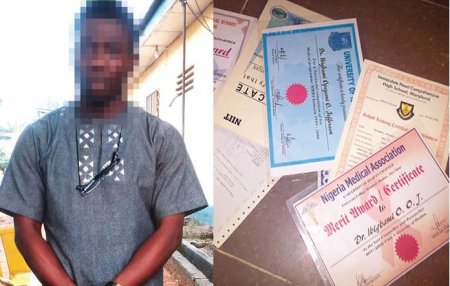 He said, “I bought the certificates from Kolawole in Ibadan. That was three years ago. I bought them from him for N100,000. He printed the seven certificates.

“I forged them because I dropped out of the university. I was actually studying Medicine. However, I dropped out in the 500 level due to financial reasons.

The Lagos State Police Public Relations Officer, SP Dolapo Badmos, said the suspect would be charged to court as soon as investigation was over.